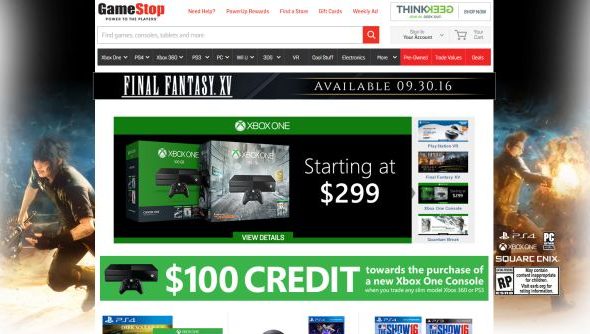 Speaking to Engagdet, Tabata said Square Enix would “definitely take a good, hard look” at PC once the console version are out the door.

“Unfortunately we weren’t able to do simultaneous development on a PC and console version for 15,” he said. “We had to focus on the console version and our goal was to maximise, optimise everything for the HD consoles. Once that’s done, then we will definitely take a good, hard look at PC and what we need to do, and consider all our options. But right now we aren’t decided, we’re still considering a lot of things.”

Tabata also said the company are aware of a “big call for a PC version”.

This is certainly an odd follow-up to the ads that appeared on Gamespot today showing off a PC logo. Clearly someone, somewhere thought they were already working on a PC version. All the hints are pointing to it happening, at least. Perhaps Square Enix are waiting for a big announcement. They’re probably sick of leaks at this point. Hopefully, when FF 15 does arrive on PC, it comes a bit faster than the port of FF 13: Lightning Returns.

Original Story 31 March, 2016: Just when you think there’s no more information to come, the leaks show up. Final Fantasy 15 PC appears to have been accidentally revealed by retailer Gamestop as part of an ad campaign in the wake of last night’s big blowout media event, Final Fantasy XV Uncovered. There’s long been a rumour that it was on the way, with some expecting the announcement to occur yesterday along with the FF 15 release date, movie and anime series. It wasn’t, but it looks like someone at Gamestop may have jumped the gun anyway.

We’re no stranger to having the best RPGs on PC, but we’ll take another one.

As of right now, the ad campaign is still live at Gamestop.com. You can see a screengrab of the page above with the PC logo prominently displayed on the right hand side, and here’s just the ad itself: Grab this for yourself at this link for as long as it remains up, if you like. Naturally, we’ve asked Square Enix if they’ve any comment on the matter, and will update if they get back to us.

As for the official information released yesterday, FF 15 is launching on PS4 and Xbox One on September 30th. There’s also a new demo available today with unique content on those consoles, that will feed into the main game, unlocking an extra summon if you complete it. It features a younger version of main character Noctis in the middle of a dream – and, well, fighting Behemoths. Here’s a trailer:

I’d hope that if FF 15 PC is a real thing – and it’s looking quite likely – this makes it to our shores eventually. Square Enix also announced a full CG movie starring Sean Bean, Kingsglaive, to be released before the game’s launch and act as a prequel. Meanwhile, a series of anime episodes are going to debut for free on YouTube, with the first already being available. They’re called Brotherhood, and introduce you to Noctis’ various companions and their relationship to the prince before your big roadtrip party in the game.

Speaking of, there was a trailer for the main event as well. I’ll leave you with it, it’s very pretty and, er, features Florence and the Machine: