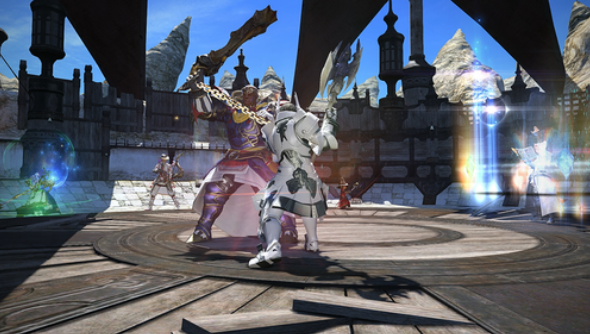 Earlier this year, Square Enix claimed that Final Fantasy XIV was ‘A Realm Reborn’ after its extensive redesign. Now, with the advent of update 2.1, Square are announcing that their MMO is ‘A Realm Awoken’. Wait, does this mean that Final Fantasy XIV has been asleep this whole time? And if a game can be this good a MMO in its sleep, what will it be like post-patch?

For an idea on what a wide-awake realm will be like, take a look at these here patch notes.

Update 2.1 hits December 17th, just in time for your Christmas break. And you’ll need the time off, because it’s a big one. The patch will focus on a mysterious Crystal Tower that contains the Labyrinth of the Ancients. Inside, monsters await you at every corner, but you must fight your way through the maze in order to ascend the tower. The Crystal Tower will be a 24 player dungeon.

If fighting mobs isn’t your preferred manner of play, then you can dive into the Wolves’ Den, the new PvP arena for patch 2.1.

In addition to these focal features, A Realm Awoken will also throw three new residential districts for player housing into the game, a quest to help resurrect the leader of the Moogles, treasure hunts, a zombie outbreak in Ul’dah, additional quests in the main scenario, a new hard-mode boss battle against the Ultima Weapon, and a new friend to be made in an Aesthetician.

The patch will also add in a new function in the form of the Duty Roulette, which allocates players instanced dungeons, trials, and guildhouses at random. Completing one per day will grant players bonus rewards.

Logging into Final Fantasy XIV from December 17th will see all these changes in action.