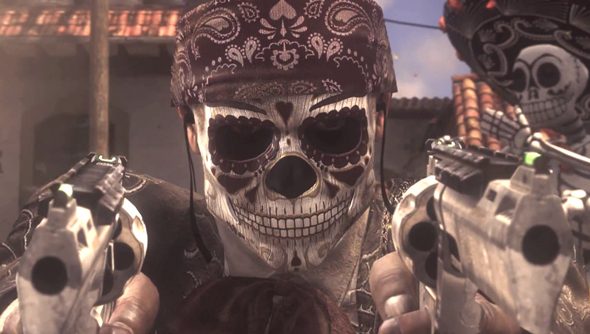 Call of Duty takes from the best – which has most often meant itself, iteration after iteration. However it didn’t do much to help it in our Call of Duty: Ghosts review.

But when it comes to trailers, it looks elsewhere. Here, it mimics the pipes-need-fixing pitch bend of Hans Zimmer’s Dark Knight soundtrack. It copies the faux-SWAT professionalism of every action film baddie in the past decade. And, brilliantly, it pilfers Boardwalk Empire’s Stephen Graham.

Here he’s allowed to employ his native Scouse accent rather than feign a Chicago staccato – but has brought with him a truckfull of Capone-vintage pent-up fury.

The trailer ploughs a furrow made familiar by Black Ops II’s Replacer – in that it’s another obscenely expensive, everyone’s-thinking-it short about men escaping from responsibility for a few hours to play their precious CoD. Invariably, they manage it via elaborate, militaristic ploys – and if you can ignore the uncomfortable undertone of sexism for five minutes, you’ll probably find something to enjoy in it:

Oh, you want to know what it’s advertising? That’ll be Call of Duty: Ghosts’ Onslaught map pack. In it, we’re promised three new multiplayer maps, named Containment, Bayview and Ignition, plus one cabin-in-the-woods affair full of unlikely horror genre fan service. On Fog, players can take on the role of Halloween ghoul Michael Myers and stumble between cabin, campsite and torture chamber. An odd kind of bliss for the right buyer, I’d imagine.

Elsewhere, Onslaught features the first of four upcoming storied Extinction episodes – plus the Maverick rifle, suitable for both assault and sniping. There’s no release date as yet for the PC, but timed-console-exclusive precedent suggests the end of February.

Bless them – they really do go the whole hog on these DLC releases. And why wouldn’t they? Black Ops II DLC made Activision silly money.