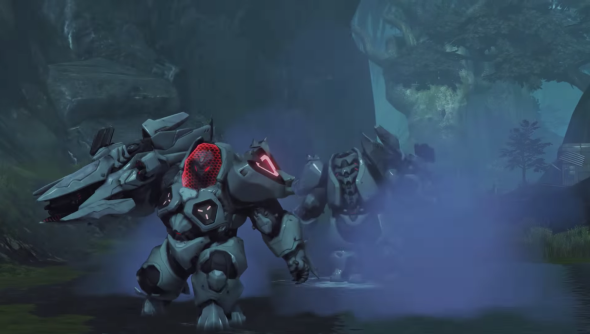 Firefall’s 1.3 update takes the action to the Amazon. The focus of 1.3 is a set of story missions that see you hunting down a Chosen clan, the Razorwing. they’re kitted out with top tier juggernauts and siegebreakers so you’re going to need to make use of the new abilities that are coming in 1.3.

Check all the new goodies out in the announcement trailer.

The Amazon map will be riddled with tunnels, swamps, and jungle. Red 5 are building it as a hunting ground, where your enemy can hide and trap you. Daily missions throw you against Razorwing Generals and their beleaguered forces. Hopefully, they’re varied enough to keep the MMO interesting.

Red 5 haven’t released details of the new abilities yet but any new powers should shake up the established battleframe builds in PvP.

Firefall’s been steadily improving since its stumbled launch in July last year. Back then I gave it a 4/10 but shortly after my review went live a major patch fixed a number of the game’s biggest flaws. It still has a long way to go, the devs admit that the early game needs to be redesigned to make Firefall from the beginning instead of the end game focus they had before release, but it is improving.

Firefall 1.3 is another step in the right direction.