Firewatch is out tomorrow and having just read Phil’s review I think it sounds great. The game’s visuals were the first thing that caught my eye when it was first announced, thus the fact that in-game photographs can also be printed in real-life sounds really cool. Not only is this an interesting quirk that adds a little more depth to what already sounds like really good game; it also serves to highlight how enthusiastic developers Campo Santo are about their first project.

See Phil’s words for yourself in our Firewatch PC review.

The feature – exclusive to PC for now – lets you buy prints of in-game photos after completing Firewatch, and was conceived by both Campo Santo and publisher Panic, the latter’s Cabel Sasser told Polygon.

“We began building the photo-sharing server and researching printers,” says Sasser. “Campo started work on their end with saving and uploading the photos out of Unity and building the UI necessary for that, we put everything together, and it turned out pretty cool.

“When we started designing the envelopes at Panic, we needed to come up with our fictitious photo company, and cooked up ‘Fotodome.’ Now, there was originally a line in the game: ‘Don’t take any pictures that would scar a Fotomat employee.’

“Fortunately, we had to do some pickup lines with Cissy [Cissy Jones, who plays Delilah in the game], and Sean and Jake saw an opportunity, rewriting the line as ‘Don’t take any pictures that would scar a Fotodome employee.’ And just like that, our fiction is complete and canonical!”

If this lighthearted service interests you, it’ll cost you $15. Here’s a snap of the printsTechnoBuffalohad sent to their door: 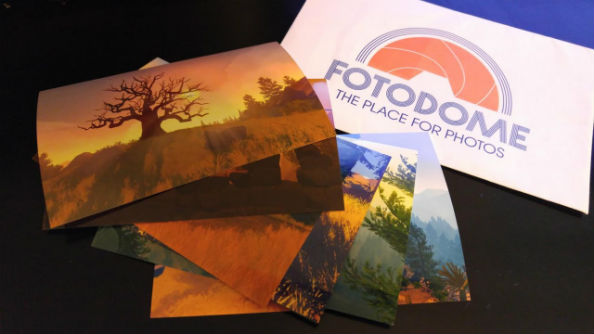 Thanks, Polygon and TechnoBuffalo.