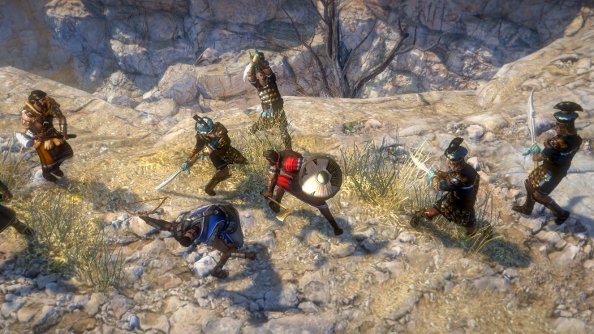 Some days, you just fancy getting in fights with Philistines, the Amalekites, and the Moabites all in the name of Biblical role-playing action. It’s hard to find opportunities to do that in 2015, and that’s why we’re giving away 10 copies of Kingdom Games’ Five: Guardians of David.

It’s an action-RPG in the vein of Diablo or Titan Quest, but instead of creating a fictional mythology or leveraging Greek myths, Five: Guardians of David tells the story of King David’s generals. It’s Judeo-Christian, then, a mythology that hasn’t really been explored a great deal in gaming.

While it tells a Biblical story, and the developers have used Christian morality as a guide for some design choices, Kingdom Games are adamant that they don’t “Bible-thump”, so no-one should feel alienated by the subject matter or approach to it.

If you fancy getting your hands on one of these 10 codes, then take a look at the widget below. Visiting our homepage, following us on Twitter, signing up for our newsletter – all these things will increase your chances of getting a code. Come play with us, Danny. Forever. And ever. And ever.

Good luck – and don’t forget to Like us on Facebook in order to be kept in the loop about future giveaways!