Five: Guardians of David is a game that tells a Biblical story of faith. Knowing that, it’s easy to assume that it will be the kind of thing you were allowed to play in junior school for education value. That image couldn’t be further from the truth. Instead, Five is an action RPG that’s got a hint of Diablo and Titan Quest about it. Developer Kingdom Games are determined to make a compelling action game that’s excitement and story first, and scripture only for those that want it.

Now two years old, Kingdom Games was set up with a very distinct purpose: approaching young people and teaching them about the morals and ethics of Christianity. “Rather than fighting to peel them away from a medium they adore – videogames – we decided to bring our vision to them in that format,” explains Mike Madden, director of development. Within two months a small studio was set up and development started. The team involves talent who have previously worked on the likes of Call of Duty: Black Ops, Darksiders, and The Old Republic.

Their first game is Five: Guardians of David, and it releases today. It’s the story of King David and his conquering of Israel, with players commanding a party made up of his five generals, swapping between each to make use of their unique combat skills.

Kingdom Games have struck an interesting balance when it comes to how Five presents its Biblical influences and message. The team don’t want to been seen as “Bible thumpers”, so much of the Christian elements are layered into the world like lore in an Elder Scrolls game. “It’s passive layers, you can get as much out of it as you want,” Madden explains. “It’s all there, down to Bible passages, but you can also walk right by it if you choose to.”

Instead, the faith-influenced messages come through in design choices. “Do we want to put in achievements like most games do for killing x amount of y enemies? No we don’t, that’s totally against what we want to do. Everyone here is looking at making sure we practice what we preach,” says Madden. 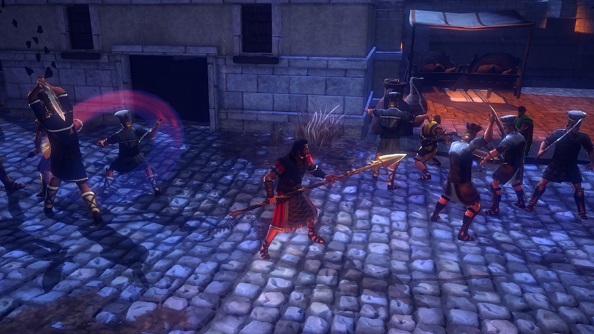 The values of the team really come across in Five’s intriguing inventory mechanics. “The culture of games is often greedy, about collecting and hoarding. We want to change that, so we have a system in place where you donate,” reveals Madden. All your money and loot can be donated to three groups: shepherds, merchants, and beggars. They form your spy network, and will help out in exchange for donations, but it’s more about the reward of human kindness. If you donate your wealth, you may eventually find that you walk into a town that celebrates your presence and your actions. “It’s about the betterment of people. Yeah you get a reward, but it’s about how doing little things can help a lot of people. So it’s about changing the mindset through gameplay,” says Madden.

The game is designed to appeal to families and people of all ages, so gory combat is exorcised, but Five is still battle heavy to reflect the fact that the Bible is full of skirmishes. There are certain elements of David’s tale that the team decided to leave on the cutting room floor, however: “After the Goliath fight in the Bible, they had to go out and collect a thousand foreskins from Philistine soldiers. That’s not something we want to portray!” Madden laughs. 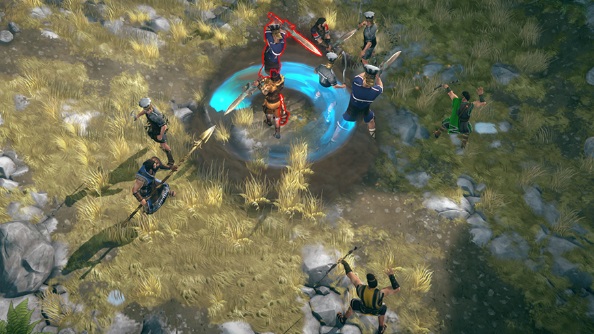 Creating Five’s world has naturally involved a lot of research, and the game’s enemies include the likes of the Philistines, the Amalekites, and the Moabites; all ancient cultures that were prevalent in the Biblical era. They naturally act as foes in the way that orcs, monsters, and mercenaries would in a more typical fantasy RPG, but the one thing the team didn’t have a straight alternative to was magic. Thankfully, the Bible is full of miracles, and Kingdom games had a lot of fun implementing them into the game.

“Originally we had them randomly going off based on things you were doing in the game, but we couldn’t give the type of control around that that we wanted. Then we realised these are heroes of faith doing the will of God, so he would entrust them to know when it was the right time for a miracle to happen,” Madden reveals. The final mechanic sees players discovering Miracle Stones, which are single-use abilities with a screen-wide area-of-effect.

Creating Five is a broad team from a variety of backgrounds. Indeed, the game could happily carry the infamous Assassin’s Creed disclaimer, “This game was developed by a multicultural team of various faiths and beliefs” on its opening title cards. Madden sees the team’s diversity as a real asset: “I’m a big believer of having more angles and perceptions looking at what we’re doing. Whether you’re atheist or agnostic or of another religion, those are good discussions for us to have while we’re developing. We can address if we’re being too heavy handed in an area, or if we’re trying to indoctrinate people.” 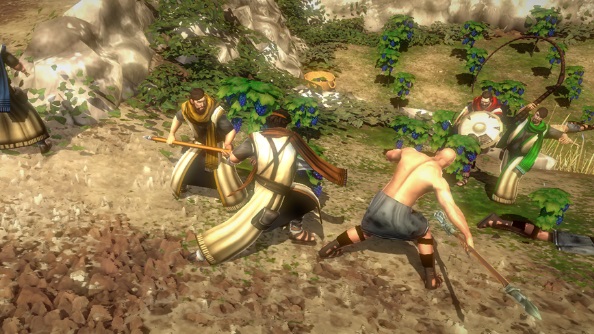 That team bring a message of morals and ethics across not only in the way the game rewards players and delivers its story, but even in the decisions behind how it’s made. For example, the narrative cutscenes are fully voiced not because of cinematic value, but because it means even those with learning disabilities and reading difficulties can get involved.

While Kingdom Games’ values are clearly Christian and strong on morality, Madden doesn’t mind if the game’s audience don’t take that away with them. “We’re not gonna have a stat on our website saying how many souls we’ve saved. That’s not the goal,” he explains.

“The goal is to put [our message] out there in a format that exposes people to it. And if some people want to go and grab the Bible and read more about it, or search on the web a little more and fact check against us to see what we’re saying is really true, that’s great. If they just want to enjoy it as a good game experience, that’s good too.”

Five: Guardians of David is out now on Steam.