As the first anniversary of Five Nights at Freddy’s approaches, so does its fourth installment. Apparently there’s a rule in horror franchises: if it’s good, you pump out the sequels as fast as possible – see Saw,Paranormal Activity, and countless others in the movie world. And now we have our gaming equivalent. Such film franchises became increasingly panned by critics as they progressed. Does the same fate await the Let’s Play darling?

As a series, Five Nights at Freddy’s has excelled at the jumpscare. As I sit here typing this out, I’m still recovering from one that happened about an hour ago. My heart rate is still elevated, and I still feel notably twitchy. But this time around, the scares are achieved in a slightly different manner to what fans are used to. The first three Freddy games lock you in a security room with camera feeds that need to be monitored. They’re a very visual experience; desperately scanning TV screens for sight of the homicidal muppets out to savage your face off. The fourth game switches things around by being a primarily audio experience: it’s all about listening for approaching enemies. 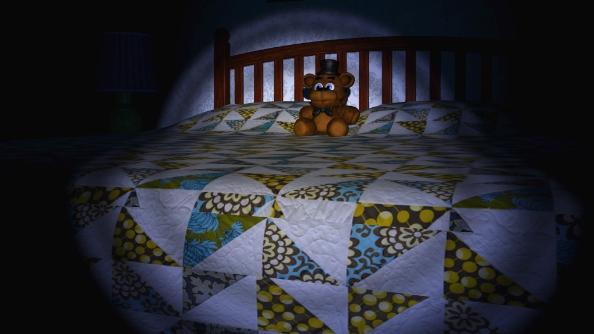 You play a child locked in their bedroom, desperately clutching a flashlight and listening out for things that go bump in the night. There are four places that need monitoring: the two exit doors to your room, the closet, and your bed. Clicking each one approaches them, and then you need to give a good listen. If you hear noises, its time to pull the door shut. If it sounds clear, you turn on the flashlight to check further down the corridor.

The simple mechanic is used for the titular quintet of evenings; between midnight and 6am (which lasts around eight minutes) you need to constantly dive around the room warding off any invaders. But should you mess up – ignore a door for too long, or switch on your flashlight when enemies are close instead of shutting the door – a ravenous, toothy teddy will dive out and tear you apart. It’s game over, and time to start the night again.

The mechanics work. The countdown timer dials the tension high, and as the final hours slowly tick by you feel genuinely distressed. Flashing the light down a corridor may reveal an enemy who was creeping towards you, and the brief glimpse of a pair of eyes or ears darting away is quite unsettling. 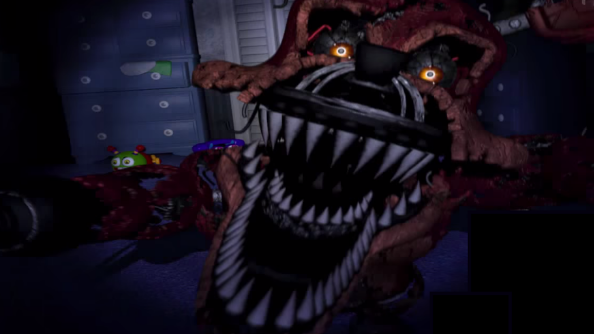 The problem is you have to do this over and over again. For two or three hours, you’re checking the same three doors, reacting in the same manner. Things slightly change as the nights progress – different enemies with different types of approach are introduced – but the key to fending off everyone is the same. And perhaps this would be fine if this were the first time we’d played this. But despite the mechanic changes, this is still exceptionally similar to the original Five Nights at Freddy’s concept.

The change to a focus on audio is welcome, but it suffers from not being as accomplished as visual cues. While the game successfully builds atmosphere with the sounds of a house at night – clock chimes, cricket chirps, and rustling in the kitchen – it’s often difficult to figure out what the sounds you’re supposed to be listening out for are. The hints say to listen for breathing, but despite having the volume cranked up and a headset clamped to my ears, I never once heard breathing. Instead I just reacted to anything that sounded different to background audio, which seemed to work but meant I never felt in control.

Lack of control was something I felt at all times through Five Nights at Freddy 4. There’s no real pattern to observe in the way the characters assualt your bedroom. You just have to pray you’ve heard correctly, and react appropriately. And when the audio felt confusing, being killed felt a little like being cheated. Which leads to frustration.

Each night can be reduced by two hours by playing a minigame before hand where you wait in the dark for Bonnie the rabbit to approach you. If you can turn your flashlight on as Bonnie walks over an X on the ground, then you get the two hours shaved off. However, this only applies once. Failing the night means you’re back on a full six hours, and since you almost certainly will fail, it makes the processalmost entirely redundant. 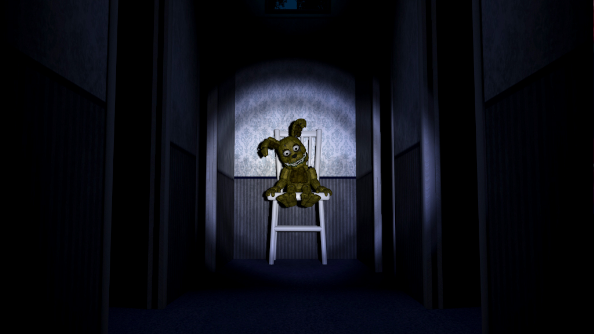 Between each night are Atari-like retro sequences that expand the story of Freddy. Considering the large amount of speculation on Reddit and in forums about the “Bite of ‘87” and various other elements of the story, this will no doubt be a large pull for a lot of players. But unless you’re really desperate for listening at doors for two hours, it seems the best way to find the answers you’re seeking is to watch the game being played on YouTube.

Five Nights at Freddy’s 4 was released a few days earlier to select YouTubers, and I think that’s telling of the experience as a whole. I’ve watched a few people play the game, and found it more entertaining to observe than to actually play. It made me think that actually the best innovation for the series would be to include Twitch integration and allow spectators to interact and mould the experience for the player. Ambitious for a single developer perhaps, but a better direction than multiple sequels every three months.

The low price point means it’s not a massive gamble to buy into Five Nights at Freddy’s 4, but considering you’ve likely played the previous three games and have now spent around eight hours keeping homicidal animatronics at bay, there’s nothing about this fourth game that begs for you to return. Instead spend the cash on a bag of snacks and some drinks, and watch someone else shriek loudly into a microphone for you.