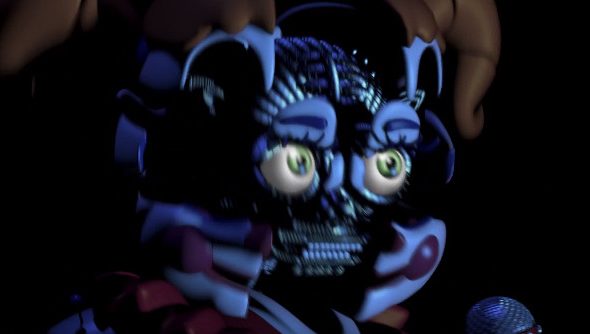 There was a period of about 20 minutes, a year ago, when I decided I’d try to work out the plot of the FNAF games. I have now, wisely, left it to smarter, more dedicated people, generally under the age of twenty. Series creator Scott Cawthon has never made it easy to decipher the tangled mess of timelines and characters that make up his uber-popular world of deadly, flesh-eating robot suits. Next game in line Sister Location, announced a month ago, uses its first trailer to make sure we all know there’s yet another mystery to unpack.

Nothing particularly spooky in the trailer, if you’re of a less steady disposition, but heads do begin to uncase themselves.

Probably the best trailer we’ve seen out of Cawthon, whose work is usually budget to say the least. If you’re harder of hearing, the voice over is first repeating “don’t hold it against us” and then finally “you don’t know what we’ve been through.”

As is their standard, the ravenous community – which has already lifted the trailer upwards of two million views since it debuted on Saturday – has begun the deconstruction. Of note are the speakers embedded in the chests of the more familiar robots from earlier games, seen behind the main, pigtail-endowed presumed-antagonist. One Redditor has also drawn the fairly clear line between that robot and a similarly styled, dressed and presented girl in FNAF 4.

Speculation, of course, isn’t far behind investigation. Others have already begun to discuss the meaning behind the dialogue heard, with this thread rising to the top. It postulates that somebody was deliberately experimenting on children to turn them into the series’ various horrors. It would also explain the “deep underground” text that flashed up, presumably some sort of secret facility.

No way to know any of this for sure, of course, until the game is out and thoroughly dissected. Likely more trailers to come before a surprise early release some time this year, as is Cawthon’s MO. Hopefully it goes better than last time.