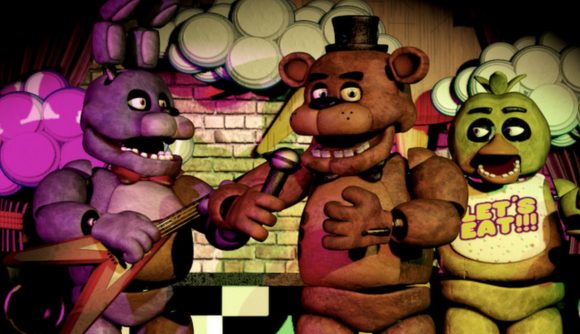 The creator of horror game series Five Nights at Freddy’s has started an initiative to fund and release fangames. A number of creations by rookie developers are being supported through the cause, which will hopefully get them a wider release, too.

In a Reddit post (cheers, Eurogamer), Scott Cawthon, the main developer behind the survival games explained the impetus behind the Fazbear Fanverse Initiative, and outlined what it’s offering to collaborators. “It’s a giant collaboration involving several fangame creators who have made some of the most popular fangames over the years here in the community,” Cawthon explained. “It’s a project that’s designed to invest into those franchises, give back to the developers, and hopefully bring new entries to those franchises as well!”

As of now, the initial lineup includes Five Nights at Candy’s 4, The Joy of Creation: Ignited Collection, a re-imagining of the original Five Nights at Freddy’s, and two others. Cawthon himself states that he’s not involved in the creative side whatsoever, only funding, and providing extra publishing support. The release plan for each is to come out on GameJolt as a free download, and then become available as part of some bundle deals that include other fangames, minigames, and the original Five Nights at Freddy’s games on consoles and mobile.

All of these projects already exist in some shape or form, but are now being remade. This is largely due to the use of copyrighted materials and assets. “It’s a big project on the part of all of these creators, so please show these developers some support,” Cawthon writes in closing. “I want to see these games on consoles, and then maybe, if it goes well, I can add more fangames to this project in the future!”

Not including spin-offs, Cawthon has put out seven games in the Five Night’s at Freddy’s series since the first in 2014. Today, aside from these fan-works, a film is in development, and a new game is expected this year. If murderous robots aren’t your deal, we have the best vampire games, and best zombie games.