Something the Oculus Rift, and the general surge of interest in VR, promises is a new perspective on classic genres – both figuratively and literally. Matt and Brad Jeffrey are doing just that for the RTS genre with their game, Flagship. It puts you in a first-person perspective on the bridge of a capital ship and leaves you to command your fleet against incoming enemy forces.

The shift to first-person gives you a completely different view of the battlefield as well as putting a focus on defending your flagship above all other ships under your command because without it you can’t lead.

To get a grasp on how impressive Flagship looks you really need to take a look at the Kickstarter pitch.

While Flagship will look great on the Oculus and has been designed with that in mind, the pair make clear that you will be able to play without a VR headset.

The story of Flagship has humans suffering assaults on all fronts after expanding out into the galaxy and finding it to be less than friendly. They’ve been pushed out of their home system and must find a new home to regroup and retaliate. It sounds a little like the premise of the Battlestar Galactica remake in that respect. So, in other words, awesome.

You’ll spend much of the campaign getting a foothold in your system. Travelling to planets to establish resource operations and build shipyards. The Jeffreys have introduced varieties to systems with astronomical anomalies, nebulae effect sensors and can work to hide your operations or enemy ambushes. The galaxy is procedurally generated there will be plenty of reason to repeat the campaign, too. 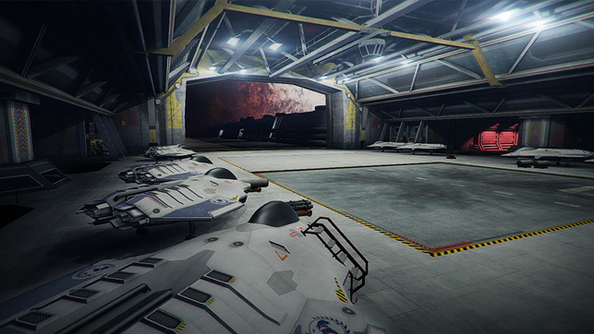 You can command all the action from the bridge of your capital ship. There’s a digital command table that looks like something out of a world war II war room (but, y’know, with more neon). At times you’ll need to command fleets in systems outside your own but you can only do so with broad strokes controls – attack, defend, retreat, etc.

Your fleets can be made up of a range of ships beside big hulking capitals – fighters, frigates, destroyers, bombers, carriers, the list goes on. The Jeffreys look to be making this as involved an RTS as you’d expect from a non-Oculus infused game.

Your fleet’s ships can be customised, too. The example they give in their pitch is one for refitting a frigate “with AA turrets and it’ll be effective against fighters but weak against other capital ships. Outfit the same ship with missile launchers and the opposite is true, or go with a mix for the best of both worlds.”

Research opens up new ship types and performance upgrades for types you already have in your possession. Plus, your ship’s crews will gain in ability the longer they survive.

Flagship sounds like a stunning game and one that will play unlike anything else currently available. You just have to watch that video of the player stood on the bridge under the glass canopy as the enemy fleet jumps into combat to be enthralled. Of course, Flagship can only become a reality if it succeeds in its Kickstarter campaign.