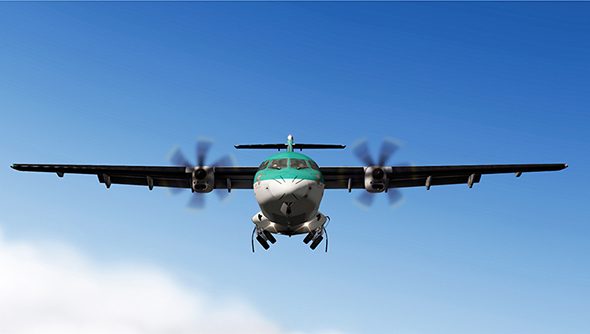 The world of X-Plane is a very different one to that of Microsoft’s Flight Sim X. There’s none of your Fancy-Dan, one-step-at-a-time, let’s all have fun in the air, laissez-faire attitude here. This is hardcore.

Consequently, the world of X-Plane add-ons is slightly different to those in Microsoft’s Happy Fun Aeroplane Game Time. X-Plane’s native mode already does a lot of what the third-party market has had to provide for FSX and co. – much improved global scenery, far more detailed flight modelling, and much more variety in the number of aircraft straight out of the box.

What tends to happen with third-party add-ons for X-Plane is a large number of ‘fan’ projects – extra aircraft and local area and airport visual improvements mostly – some paid-for, but the majority being freeware in keeping with the ‘all in this together’ X-Plane community spirit.

So, following on from last week’s Best FSX Add-ons, let’s dive head first into what’s recommended for X-Plane users to get more out of their experience…

X-Plane’s default aircraft are already pretty good and has everything from single-prop Cessnas to experimental sub-orbital fantasy planes. So any third-party offering has to provide something pretty special. The Bombardier Dash 8 is such a beast, a twin-engine turboprop created with the input of actual Q400 pilots to accurately simulate handling.

It even comes with a pop-up Load & Balance Manager window that lets you adjust not only fuel but passenger and cargo distribution throughout your plane in real-time – presumably simulating that moment on every flight when one of your passengers has had enough of the annoying baby crying in the seat next top him, snaps and hurls himself out of the emergency exit to end the pain. That can be simulated at the press of a switch. Huzzah for technology!

Sticking with the twin-prop commercial aircraft theme, the ATR 72-500 from McPhat Studios is also a very worthwhile addition to your virtual hanger (hah!). It features a superbly detailed, high definition visual model with a wealth of liveries to choose from, plus a fully detailed passenger cabin and all the variable night lighting you can ask for.

Best of all though is the manual, so detailed it not only includes a list of take-off and landing speed charts for various different weight setups (these things are important, yo) but even a completely gratuitous series of diagrams showing the electrical system power circuits… okay, even I’m having a hard time justifying those, but I love the fact they’re there. You’ll forgive us our biases here at PCGamesN’s UK home, but we’re a sucker for any scenery pack that lets us fly over our own back gardens or land a helicopter on top of Nelson’s Column. Photo-realistic scenery is often a serious sim pilot’s first port of call, but few do the UK better for X-Plane than the guys at RC Simulations and their VFR Photo Scenery packs.

Split across four volumes, these are scenery meshes made from ultra-high resolution aerial photography and cover the whole of England and Wales. It’s a hefty set, making up a total of over 225GB of scenery data if you buy the all-in-one pack, although you can buy each volume individually if hard disk space (and finances) are a concern.

We featured Aerosoft’s range of MegaAirports in our FSX addons round up, but truth be told, their X-Plane series is equally as good. Hamburg, Toulouse, Zurich and Lugano all contain the same level of detail, photo-realistic textures, accurate building placements and night lighting effects, and packaged flight charts as their FSX brethren.

But the best of the impressive bunch is almost certainly their realisation of Schiphol International in Amsterdam. Featuring not only the airport but the surrounding area in high-resolution detail, this pack even contains the latest terminal building with fully working hanger doors and the fire training centre for the ground emergency crews. Obviously they’ve seen me fly.

Let’s not beat around the bush with this, one of X-Plane’s big failings is the lack of any substantial traffic, especially compared to FSX’s jam-packed skies. Assuming you’re not going with the global multiplayer route (see above), then the best you can hope for with X-Plane is between one and twenty randomly-placed AI planes in your local area. While you do get to choose what they are, you don’t get any say in where they show up so you often end up with 747s taxiing around small ranch airstrips.

XTraffic is a plug-in that lets you record up to nineteen of your own flights then add those in as the AI planes that fly in your area, customising them to make things a touch more believable if you put in the time. If you don’t want to put in the time, there’s a site here in which X-Planers share their own recorded flight patterns for airports all around the world.

In keeping with X-Plane’s harder-than-hardcore approach to most areas, flight planning can be just as unintuitive as everything else. You have to know your airport ID tags and manually enter your route much like real pilots but without the training. XPFlightplanner takes the headache out of this pre-flight ritual with simple-to-use menus, automatic route planning and even the option to print them out in a clear, readable manner. If you get lost now, it’s your own fault.

You may have heard of VATSIM – a constantly running global network for both FSX and X-Plane that connects pilots with each other in one big virtual sky and then teams them up with other players acting as Air Traffic
Controllers to keep that one big virtual sky from becoming one big
virtual clusterf**k. XSquawkBox is the essential bit of software
that you need to install in order to give you access to this world of
aviation camaraderie. It connects you to main VATSIM servers and
immediately fills your sky with other users desperately trying play down
the urges to ‘accidentally’ bump into your Cessna with their 747s. Or
maybe that’s just me. Okay? That said, if we pile enough pressure on the guys at REX Game Studios, they might just get around to finishing the X-Plane 10 version of this incredible weather-based texturing add-on. Superbly detailed cloud and sky textures (sky can have textures, it’s a thing) which can be based on real-time weather info taken from around the world which in theory means the clouds you see out of your window should be the same. They won’t be, it’s not that accurate for god’s sake, but the general patterns should match up.

Meanwhile, for X-Plane 10 users, there’s the slightly lower-key but still worthwhile Maxx XP which brings improved cloud, sky and airport textures to vanilla X-Plane 10. Not as impressive as REX’s but since X-Plane 10 pilots can’t use them right now regardless, beggars can’t be choosers.

You’re reading the flight sim channel at PCGamesN. We combine new, original content with feeds from the best flight sim websites and reader submissions. For the best, new stuff about all plane games, check our homepage and follow our flight sim Twitter account for regular updates. Check our retail partner SimStop for Flight Simulator add ons and more.