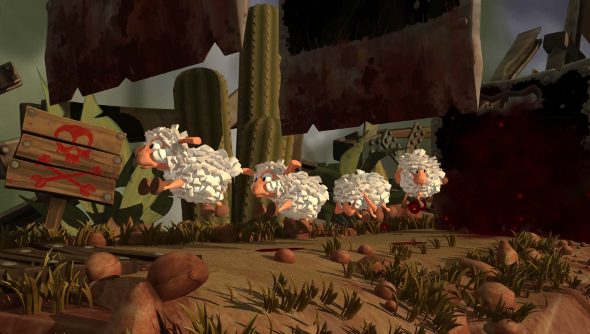 It’s about time that Team17 took a break from Worms, giving our wriggly, murderous friends some well deserved time off from the incessant war. But the developer’s love of giving cartoon animals violent deaths cannot be abated, which is why we have Flockers – an A to B puzzle game set in the Worms universe, but where sheep are the stars.

Flockers is immediately familiar. It’s essentially Lemmings through the lens of the Worms universe, which should be great, especially since Team17 is no stranger to Lemmings either. But there’s something missing, and I spent most of my time in the maze-like abattoir trying to find out what that was. 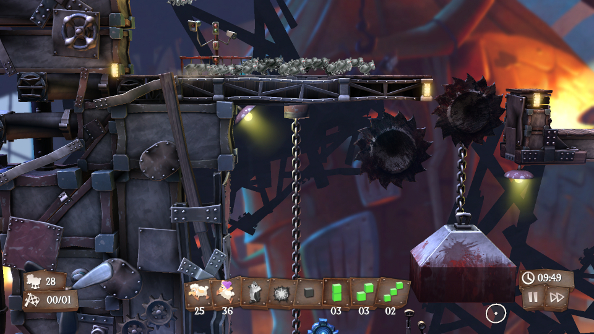 The sheep have had enough. They’re sick of being fodder for the perpetual battle between worms, presumably, and have decided to escape. But sheep, as you might already know, are very, very stupid. They are tasty, make warm clothes and are deadly when weaponised, but are otherwise completely useless. So they need some guidance if they are to escape the grim, steampunk factories that serve as their prisons.

From the moment they are inexplicably farted out of horns or trumpets or gramophone speakers, they march forward, until they hit a wall and turn around. Sometimes there is no wall. Sometimes there’s a massive pit with spikes at the bottom or a swaying axe waiting to drop. In those cases, the sheep become dead sheep.

This is a bad thing and should be avoided.

Stopping these little, fluffy barnyard animals from an unpleasant death necessitates leveraging their innate, unusual abilities. These animals can fly, jump, explode and stand on top of each other or create stairs (out of themselves). The jumping, flying and exploding is an obvious nod to Worms, where the sheep bound around maps, leaping all over the place before finally blowing up, leaving a crater in the ground.

Each mission is a deadly, maze-like puzzle, where the only way to overcome obstacles and avoid traps is through using the aforementioned abilities. If the sheep are faced with a gap, then they’ll need to be transformed into jumping sheep. But if that gap is, in fact, a massive chasm, they won’t make the leap. Instead, two or three sheep will need to act as stairs, getting their brothers and sisters closer to the other side before they make the leap – essentially sacrificing themselves.

Physics puzzles rear their head, too. Sheep will occasionally need to weigh down buttons to operate machinery or bump into rolling objects to clear a path – not unlike the last couple of Worms games. As I said, it’s all pretty familiar.

For the first hour or so, this is all fine. It requires a trial and error approach rather than skill or thoughtfulness – leading to far too many restarts and pointless deaths – but there’s an expectation that things will change. After all, there are 60 missions, not counting the bonus levels. The change doesn’t really happen.

The repertoire of abilities is frightfully small, which removes any sense that the sheep are progressing. The levels themselves increase in challenge, occasionally adding new elements and devilish “boss” contraptions that must be overcome using a bit of imagination and experimentation – but the vast majority of puzzles and traps are simply variations of the sort of challenges posed by the first few levels. Over and over again.

The boss contraptions are wonderful, though. Awful, infernal things that could only come from the devil’s own workshop. Often they chase the poor sheep, getting closer and closer, gears grinding, blades spinning. Nightmarish stuff. Surviving those encounters usually takes all of the wee, fluffy beasties abilities, and it’s where the game shines.

What’s a bit peculiar about Flockers is that, the way the puzzles are designed, they tend to be less brain teasers, and more challenges that require strategy and timing. How one overcomes an obstacle is often extremely, painfully, obvious – but actually getting all the pieces in place requires a bit of perseverance, luck and replaying levels a few times.

Frequently, the sheep arrive in a level with no abilities in their loadout whatsoever. So the sheep need to be guided to power-up crates, unlocking a limited number of these powers. That’s not a problem, and it gently encourages exploration and taking multiple routes.

This is encouraged further by golden sheep imprisoned in some levels, and objects waiting to be collected that unlock calming, pastoral bonus levels. It stops being about getting to the finish line, instead becoming a twisting journey through a deadly maze to collect life-saving resources. The game needs that extra layer of complexity.

Where it becomes frustrating is when, in some levels, a single sheep with one single power is expected to do most of the heavy lifting, and if that lone hero dies, then all is lost. It’s just a bit silly. I know exactly how to finish the level, but one tiny slip up forces me to quit the whole thing and start right back at the beginning. There are a bewildering number of levels with similar problems, where using an ability in the wrong place makes it impossible to complete the blasted thing – worse, that often doesn’t become clear until right near the end.

And there’s a lot of fiddlyness. Interacting with whole groups of sheep is a doddle. Want to make them all super sheep? Right click, making the cursor a rather large circle, left click to apply – they are now all super sheep. If only things were so wonderfully simple when applying this to individual wooly mammals.

The sheep are always on the move you see, and sometimes overlapping each other. If it was possible to pause and zoom in very close, then selecting one wouldn’t be too much trouble, but pausing the action means losing the ability to actually interact with the sheep. This can have rather devastating consequences for these innocent creatures.

Say there’s a bunch of them in a pit, and the only way they can escape is for one of them to don a cape, fly out of the pit and hit a button, raising the floor up and thus allowing his chums to continue their important journey. But there’s a problem! Only one sheep, in this crisis, can be the super sheep. The chances of applying the power to a sheep going in the wrong direction, due to how crammed in they are, is about 1 in 2. If that happens, the sheep, let’s call him the anti-hero, ends up leaving the pit, but on the wrong side, and wanders off to his death. That’s it. Done. Nobody is going to save the rest of the animals. They are all doomed. All because I couldn’t bloody pause the game and use the power.

This sort of thing happens quite a bit. And it’s rubbish.

Despite the completely obvious similarities to Lemmings, Team17 has clearly made some significant attempts to set the game apart. There’s the physics-based stuff – which is, hmmm, not bad, not great – and other things like teleportation networks and doohickies that mess around with gravity, making sheep walk on the ceiling. Unlike the physics stuff, these bits can be delightful, increasing the scope of the levels and once again throwing in more layers. But they can also make things hard to follow.

When sheep go through a teleporter, it’s not immediately obvious – in a lot of cases – where they will reappear (some levels have lots of them), and by the time they are found again, they could all be dead. So there’s a lot of stopping and starting, pausing so you can find the bloody animals. This gets even more troublesome when there are several flocks, all going in different directions. The extra irons in the fire are welcome, but it doesn’t strike that all important balance between complexity and complicatedness.

So there are a lot of problems. But there are, certainly, elements of Flockers that are genuinely amusing. What’s missing, though? That question followed me through the entire game. And now I know what it is: Flockers doesn’t have much personality. 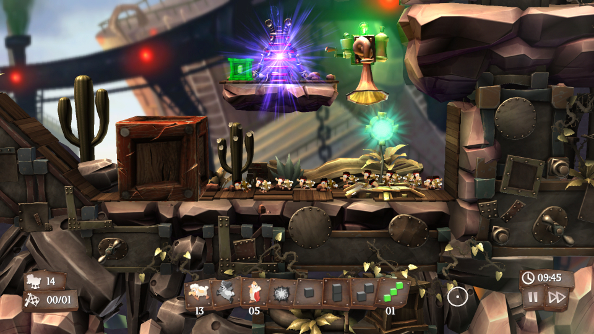 It’s sort of bizarre, coming from Team17. Worms oozes charm and personality out of every pore. And at first, with the silly sheep and over-the-top violence, I thought Flockers might too. But it simply doesn’t. The enemies are all just traps and mechanical contraptions, the sheep themselves are brainless bits of fluff, and the levels are all pretty bland, and change themes rarely. Cutscenes appear out of the blue, but I honestly can’t remember what happened in any of them. Sheep died, I guess? Even a narrator would have helped. I am, of course, thinking of either Matt Berry or Katherine Parkinson who did such wonderful jobs in Worms.

I expected more from Flockers. I expected more from the Lemmings formula so many years after its inception. But the good ideas contained within Flockers – and there are quite a few – don’t always come together, or are hampered by design missteps and a lack of charm. In short spurts, a couple of levels here, a few challenges to unlock some silly sheep skins – 8-bit and Rambo-inspired skins were a highlight – there, it can be a great deal of fun, but it lacks staying power.

At times, it still feels like it’s in Early Access, not because it’s buggy, but because it’s missing that spark and polish that’s kept Worms alive for so long. Yet I do hope this isn’t the last we’ve seen of these escaping sheep. There’s a good foundation, and a need for inventive A to B puzzle games.