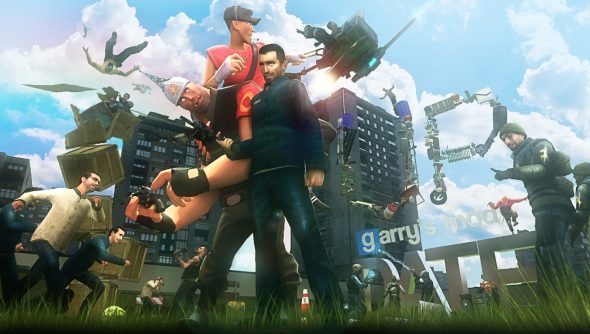 Despite being a tiny two-man team supplemented with a few contractors, Facepunch studios are one of the the biggest PC gaming success stories in the UK. A vast gaming community has sprung up around Garry’s Mod; their brilliant poser/sandbox/builder thing. But we’re still waiting to see what they do next.

Apart from a few iOS apps, not much has emerged. So what’s going on? And how on earth can they follow Garry’s Mod?

Garry’s Mod is eight years old. Six of those years it’s been available as a commercial product. And it’s still going strong.

“If we didn’t have a game out at all we’d probably have thrown something else out by now,” says Garry, “but if we release anything people are going say: ‘it’s from the maker of Garry’s Mod’. And then they’re going to say: ‘It’s not as good as Garry’s mod, he should have stuck with that”.’

”
We’re not really like a big studio in that we’d throw a big meeting and get design plans”, said Garry. “We just think: this is a cool concept then try it out. I think we are kind of harsh on ourselves.It’s that difficult second album thing: Garry’s Mod was such a big hit it’s hard to get anything that would match that. We tend to make things and then say this is going to be nothing, and then throw it away and start again. Nothing’s come close.”

But Garry isin a unique position. Facepunch defy industry convention: Garry’s Mod is selling very wellr, with salesrising on average 33% per year. Facepunch don’t do E3 or GDC, and whilst they have a vast office, they only have two full-time employees.”We can play football up here, we’ve got a treadmill,” jokes Garry.

In fact, their success is surely because they defy convention. Garry is solely responsible for updating the mod, while the rest of the team and contractors are used to prototype new games. “I couldn’t justify not working on it considering the amount of money it’s bringing in,” says Garry. “It’s kind of a sin not to work on it”.

And that’s what’s next for Facepunch. Instead of a follow-up to Garry’s Mod, Garry’s been working on a huge update to the main game. “What I’ve been doing is, whereas normally I’d be updating the live version every week I’ve branched that off into a beta and updated that every week, just to stop the live version from constantly breaking and having everybody moan at me.”

The forthcoming update will add support for theSteam Workshop, updates to the engine, and new posing options for the bodies and faces.

But a follow-up game will eventually happen, because that’s what games companies do. And when it does come, it won’t have anything approaching a grinning G-Man in it. “If we make anything else it won’t be similar. We’ve already done that. It exists already. It wouldn’t interest us to do it, we’d rather work on something that would interest us than working on something we’ve already done”