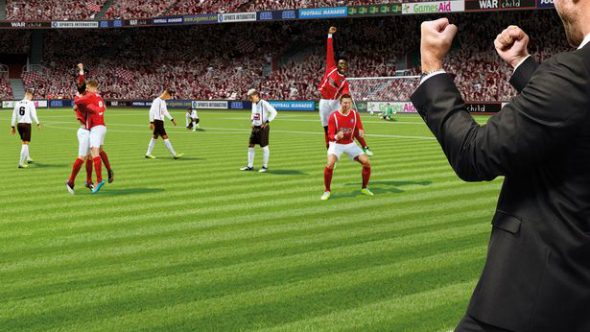 Football Manager 2017 is officially on the field with a host of new features ready for the budding armchair coach in the new season. Here’s everything you’ll need to know about the new sports simulator, from release date to minimum specs.

Could this year’s edition be one of the best PC games of 2016?

Football Manager 2017 is slated for a November 4 release date on PC, and until midnight on October 14 fans can pre-order with a 5% discount for every previous year’s FM game they have in their Steam library up to 20% off.

On top of Quick Start speeding things up, FM17 will now support 64-bit operating systems meaning it’ll eke out extra power for its monolithic spreadsheet calculations from your high-end processors. But to get you started, here’s the absolute bare minimum it’ll need:

There’s an early access beta available right now, meaning you’ll get a couple of weeks with the football sim before release.

I’ve just given the green light for the beta. The process from now takes 24 hours or so. So you should expect it this time tomorrow. #FM17

Starting a career in the beta will carry over to the main game if you want it to, but presumably some amount of bug fixing – i.e. the point of running a beta in the first place – could lead to odd results. There don’t seem to be any restrictions on the beta, however, so if you want to go all-in before release there’s nothing but the slow deathmarch of time to stop you.

You get access to the beta by pre-ordering on Steam or the Sega store.

Want to know what we think of the finished game? Here’s our FM17 Review from our resident expert, covering every aspect of the new game and how it compares to previous efforts.

Want to know how to play? Thanks to the beta we’ve already been figuring out some of the best possible moves you can make in the early game to give you a headstart. Here’s our thoughts so far:

First up, all the new niceness you’ll get to poke around with once the game arrives. Improving on last year’s iteration, FM17 will feature smarter AI players who make decisions in the moment, lending a bit more credence to their performances on the field. This is a running theme throughout as your opposite number managers will also make better decisions on who to hire to their team, meaning several years into a playthrough they’re not still trying to outbid you for a star striker while they have no-one at left-back.

Also on the field you’ll find everything looking a lot more realistic thanks to improved player animations backed by mo-cap by Creative Assembly, as well as a new camera from behind the goal to better inspect your squad’s formation. Other aspects of the beautiful game, including the referee spraying down a length of shaving foam at ten paces and teams shaking hands before a match, are also included should you want to watch and get the full authentic feel of a game. You can even add your own face to your manager and choose markers for animations to fit.

Off the field is, as always, where the real meat lies as a new social media system has been introduced alongside the news and email inbox. The feed will show fan reactions to your performance as well as possible transfer rumours which can affect your currently active negotiations. Players in your team will also do their own interviews with the press and potentially turn the crowd in their favour if, for instance, you’ve kept them out of the A-squad too long and they’re angling for more pitch time or a better transfer deal somewhere else.

News stories and social media posts also come with imagery now, tailored to best fit the story or post with a club badge and the player’s profile picture alongside, or a particularly amazing goal scored in one of your games in gif form.

In the dressing room and behind closed doors there are new staff members to help you out. There’s a personal assistant to delegate email-answering to, an assistant coach to provide backroom advice and attend press conferences, and data analysts and sports scientists to help improve your squad and reduce the likelihood of injuries.

The scouting system has also been improved, with better read-outs of how players will perform and their strengths and weaknesses. Players also have a wider range of personality traits such as ambition, loyalty and professionalism. Some will directly affect their transfer options, such as a player with lower adaptability being less willing to take job offers abroad as they’ll get homesick.

There’s also a Quick Start option now, to get you into a league faster by simply choosing a team straight away and having the computer whittle down the potential league options for you.

For more info see the Facebook live Q&A after the feature reveal: