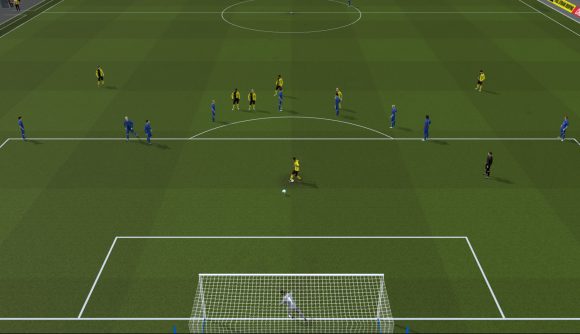 Football Manager 2020 is one of the latest free games on the Epic Games Store, and being part of the offer has done wonders for the football game‘s player count. The simulation game‘s been downloaded a million times so far, dwarfing players from other platforms.

Series director Miles Jacobson broke the news on Twitter. “We were told to expect big numbers, but am amazed with what we’re seeing,” he wrote. “Over 500,000 players of Football Manager 2020 on the platform in 24 hours, and over 120,000 currently playing on the platform.” As usual, Epic’s weekly free games changed over on Thursday. Football Manager 2020‘s regular price is $60, so free is quite the heavy discount that, obviously, many decided to take advantage of.

Jacobson then updated that it had become one million, which is several times as many that tried it on a free fortnight on Steam. Players are still stretching their managerial talents on Valve’s platform, mind, with over 80,000 currently playing according to Steam Charts, at time of writing, with a peak of over 93,000, and an all-time peak of over 180,000. Epic doesn’t yet have a Steam Charts or SteamDb equivalent to verify sales or player stats.

Football Manager is the second major series to have a limited-time free offer on Epic in recent months, Total War Saga: Troy did the same for 24 hours in August, attracting an incredible seven-and-a-half million claimants. As the online marketplace continues to shift, releasing for free for a set period is becoming a preferred method of invigorating the community and generating word-of-mouth. Grand Theft Auto V, a game you’d think everyone already owned, actually had a spike in sales after becoming one of Epic’s free games. If even a portion of these Football Manager players check out Sports Interactive’s other output, or stick around for Football Manager 2021, it’d be a considerable boost.

ONE
MILLION
PLAYERS
in just 3 days