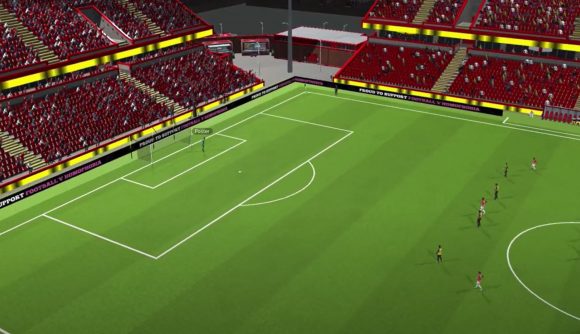 If you’re in the midst of a busy season in Football Manager 2021, you’ll notice some new banners alongside the pitch on game days. Developer Sports Interactive is supporting Pride in Sport’s annual Football v Homophobia campaign with in-game banner ads that you can see in the 3D engine.

Football Manager games have frequently featured promotional material for charities, and these have included Kick it Out, War Child, and several mental health charities as well. The FvH banners appear as pitchside hoarding ads, but they’re appearing for free as the result of Sega Europe, Pride Sports, and Sports Interactive discussions – the developer says it was keen on supporting the campaign this year, and the ads will appear throughout the month of February, which LGBT History Month in the UK.

“We at Sports Interactive are delighted to support Football v Homophobia and to use the pitchside advertising in Football Manager 2021 to help raise awareness of the campaign’s incredibly important work,” Miles Jacobson, Sports Interactive’s studio director, tells us. “I’m passionate about making football more inclusive and believe that football should be a game that’s welcoming to everyone. I hope that Football v Homophobia will continue to make that a reality for more LGBT+ people, whether spectators or players, and at all levels of the game.”

You can see the banners here:

The Football v Homophobia digital banner will be appearing in @FootballManager throughout February 🏳️‍🌈🏳️‍⚧️ pic.twitter.com/JzcERvwYin

Football Manager 2021 has sold more than a million copies so far, which means these ads have some pretty significant reach.

Check out some more of our favourite football games here, or find more information about the Football v Homophobia campaign at the official website.