A global pandemic was not going to stop a new Football Manager from coming out this year, even if it did manage a bit of a delay. But with Football Manager 2021 due for release later this month, players are justifiably wondering what’s changing this year – and whether the new features Sports Interactive has recently revealed will really be changing the way they play the game.

Those new features make for an impressive sounding list, that’s all the more impressive knowing that Sports Interactive has worked almost entirely from home on this year’s version of its fastidiously detailed football simulation. The studio has worked with SciSports to create a bespoke expected goals system, it’s added a new layer called gestures to interactions, and it’s revamped the presentation for match days – you’ll be watching better-looking matches as you receive up-to-the-moment data on your squad’s performance.

But veteran players have worried that a couple of these systems are simply ‘re-skins’ of mechanics already present in the game. The new ‘Quick Chats’ function duplicates interactions they already have with players, staff, and media – what’s fundamentally different about doing it over an in-game mobile messaging app? Aren’t gestures more or less the same thing as the tone system added way back in FM 2012?

Features producer Stephen Davidson says the team has picked up on these complaints, and tells us that while he understands where they’re coming from, the new features help add real depth and nuance to Football Manager 2021’s simulation.

it speaks to the roleplay element of the game

“Obviously, I’m aware that people went, oh, you’ve just re-skinned the tone system,” he says. “And now I’m very sad when they say that, because it’s absolutely not the case. But this is our first step to a new way of doing interaction, and it speaks to the roleplay element of the game. Over recent years, it’s something that some people have criticised us for – ‘why is this part of the game if you’re not going to give it the attention it deserves?'”

Davidson says the new gestures system allows for a broader range of responses that adapts to the situation at hand. ‘Aggressive’ looks different during a press conference than it does in the dressing room, and so the new system is an attempt to capture more of the real world in the game. Similarly, while there are already ways to talk with rival coaches, with players, and with members of the press, the new ‘Quick Chats’ function allows Football Manager to more closely mirror the way these conversations are really happening in real-world pro football.

“People are totally right, you could [already] interact with people in a way that, I suppose, was something similar to a Quick Chat,” Davidson says. “For us, that piece of design really came out of a lot of conversations with football people, and so much anecdotal evidence that much of the communication that’s going on in and around football is happening using these popular messaging applications. We felt like the game wasn’t really simulating that very well, actually… Modern communication is very different to the way a football manager was 10 years ago, 15 years ago. Things have changed a lot in the way humans interact.” 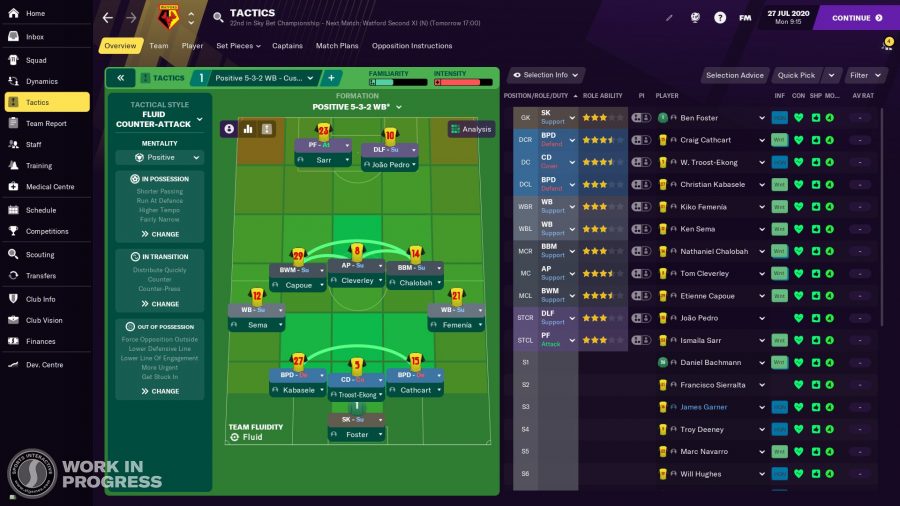 With Quick Chats and Gestures, along with the new interface for press conferences, Sports Interactive is broadening the toolset players have for interaction across the board. Davidson says this shift in perspective sets Football Manager up for future development – it’s an adaptable framework that’s better positioned for expansion and refinement going forward.

“It’s the first steps out the door of us getting ourselves in a position where we are able to better simulate the modern, current, contemporary world. And it’s boring and not satisfying to people who are looking at the end product, but it’s a lot of getting our ducks in a row under the hood so we’re able to do really powerful things going forward,” Davidson explains. “You know, a lot of very smart people having to do a lot of work on a lot of legacy code, right? This game has been iterated on and iterated on for 25 years, and things are very different to the way they were at that time.”

Quick Chats and Gestures may be evolutions and expansions of existing Football Manager systems, but what’s all new is xG, or expected goals. It took some time before Sports Interactive was ready to implement an expected goals system, as studio director Miles Jacobson initially felt that the metric wasn’t accounting for enough information on the pitch. 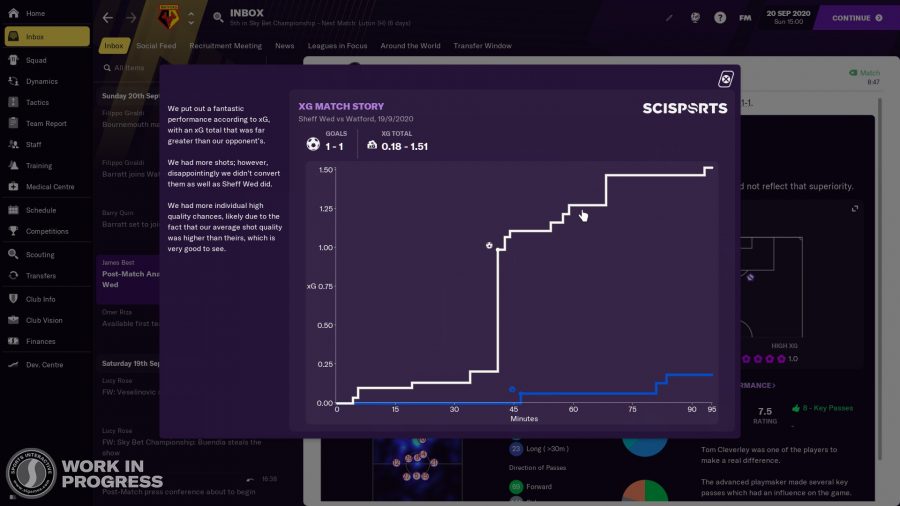 “At the time that it was first being talked about and being used – people talking about it on Twitter, and you started to see it drip-bleeding into football coverage on TV – [Miles] felt that the models weren’t advanced enough, they didn’t take into account enough information to be meaningful. And so he resisted the urge to put it in,” Davidson recalls. “There were definitely voices in the studio that felt like we should just do it, you know, it’s happening, I want to see it. And Miles held the line on that one for a long time.”

Football xG models grew increasingly complex over the years, and it became clear that xG wasn’t just a fad. Eventually, Jacobson agreed with the developers pushing for xG, and talks began with some of football’s biggest data fiends.

“We started to bring a group of people together who were really keen to improve all of the stats and analysis around the game, which is something we’ve done for FM21. And xG was sort of the jewel in the crown if you like, because we knew that a lot of people were waiting for it.”

xG was the jewel in the crown if you like, because we knew that a lot of people were waiting for it

It turns out that Football Manager has some distinct advantages over the real thing here: rather than relying on the interpretation of an observer who is manually logging the position of players and the height of the ball, Football Manager always knows exactly where everything on the pitch is at all times. This means that the expected goals figures you wind up with in the game are going to be significantly more reliable and accurate than the ones you’ll get from real-world xG models – at least until football tech catches up. In other words, it’ll probably be a while before Sports Interactive’s xG model winds up impacting the game the way its database has with scouting and odds-making.

With launch coming up, Davidson says he’ll be paying close attention to Football Manager’s streamers and players to see how they’re reacting to the new edition. “It’s a weird, tough game to stream, I think, because it relies on the person’s personality as much as the excitement of the gameplay and the visuals,” he says. 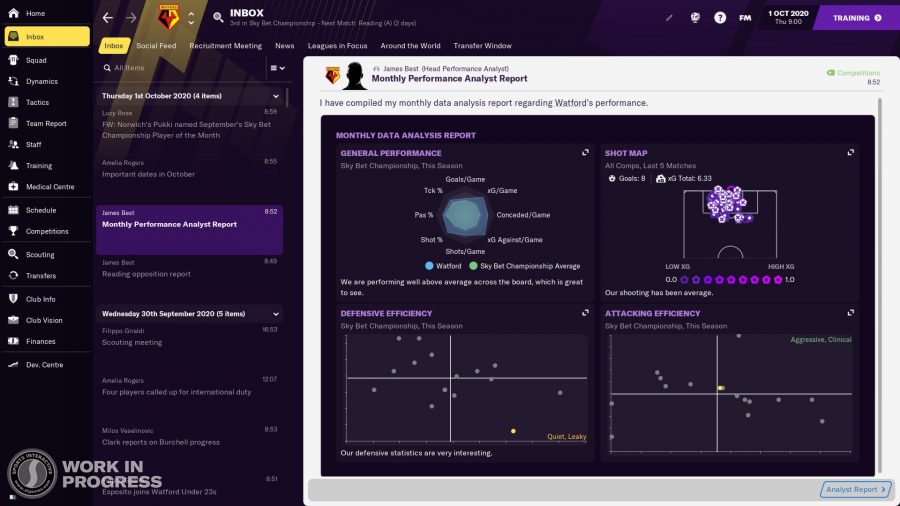 For him personally, as a developer, the mark of success will be if he can sit down and play without subconsciously looking for stuff to fix.

“Anyone that works at SI can look at Football Manager and go, ‘hmm, I need to fix that, that’s not quite what I needed it to do,’ you know? You see the strings behind the curtain,” he says. “And if I’m able to play the game and not encounter those, that is a really great moment for me in a year – to drive my car in the world of Football Manager and not hit speed bumps. And often it’s speed bumps that no one else is going to know… That’s a real measure of quality.”

Of course, he’s still looking ahead to next year – and beyond.

“It’s the start of quite an exciting journey,” he says, “And well, it’s one we’ll continue doing in the future.”