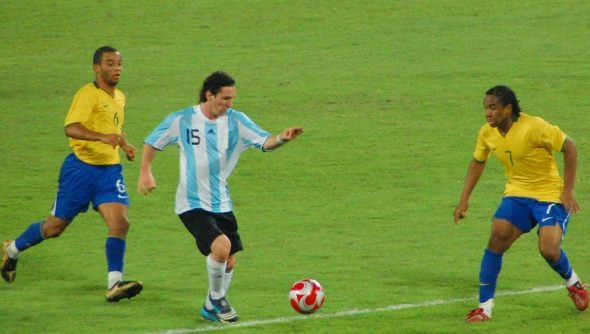 You’re reading this on Football Manager N on PCGamesN. We’re a brand new site that combines original journalism with user submissions and feeds from across the web.

Realism is always tough when you’re dealing with licensing issues across the globe. FM2012 does its best, but some teams, names and outfits are all protected by the copyright guard dogs, barking and snarling with their teeth bared if you dare include them. Not even tasty treats will stay their fury. Luckily fans of the game are foolhardy souls, willing to do what developers SI Games could not. If your game is missing a Messi (he’s actually in there, but that rhyming scheme is too delicious) and you’re seeking the San Siro, here’s how to fix it.

Now you can display the crafts from the finest fashion artisans of the football world. The downloads in this thread takes all the flakey strips that FM generates and replaces them with the actual stars’ stripes that each team has. There’s a no megapack rule in this one, so each league has to be downloaded singly. The benefits are that, when you want to update to next season’s kit all you’ll need to do is update the league and get your perfect shade of Norwich yellow for that season. It’s also done piecemeal, so if you discover a missing shirt you can pop into the thread and point it out. Next season’s clobbers are already underway.

Even using the real stadium as a background for your team is verboten. According to the Stadium Recognition Act of 1994, you need written permission from the building itself. This FM12 Background’s megapack is so voluminous it’s split into six separate pieces, to allow for the 500 stadium photographs . Even then, it’s not complete. If you want every stadium you can find, there’s a nation-by-nation download available as well found here. The megapack has 500 pictures that it replaces: the England download here boasts over 800 on its own.

You might think you know what the ‘Real Names’ mod does, but you’d be wrong. Obviously it takes all the fake names that the game generates and gives them the red card and a two match ban (also: it talks about them behind their back and steals their Maltesers), replacing all of the major teams and player’s names with the correct spellings. But it doesn’t stop there: FM12 deals with the world of foootball, so the name pack also adds the names of the news outlets, so you can pretend you just hung up the phone on the hack from relevant sport organs. I love how that’s important to people. Mod on you crazy diamonds.

Just as names can be held back, faces can too. FM’s world is full of shadowy silhouettes where a smiling, happy footballer should be. Real faces make sense in a world based on real-world recognition: with Real Faces, you don’t need to pretend that grey blob is Scottish third division legend Archie MacPhee. It replaces over 3’000 fizogs, but sadly Wayne Rooney still looks like Wayne Rooney.

You’re reading this on Football Manager N on PCGamesN. We’re a brand new site that combines original journalism with user submissions and feeds from across the web.