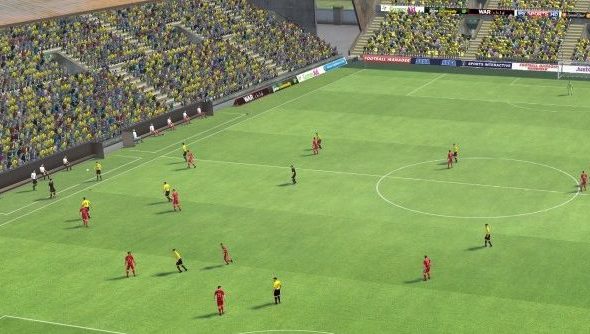 Football Manager 14 offers the most comprehensive simulation of the if-not-beautiful-then-quite-pretty game we’re ever likely to know. Even EA have been forced to admit defeat, retiring the FIFA Manager series earlier this week.

But it’s not quite a true simulation. It turns out there are elements of real football that Miles Jacobson and his team at Sports Interactive would rather forget.

“As far as racism and homophobia goes, we’ve been a big supporter of Kick It Out and have had their logo in the game for about 14 years,” said Jacobson in a chat with RPS. “There are other aspects as well, such as hooliganism and match fixing, that are part of the game in real life that we don’t want in Football Manager.”

Jacobson explained that there would be legal ramifications for adding those aspects of the sport to the game – the same ramifications that mean only footballers randomly generated to replace retiring real names are likely to be hungover and absent for training, or spotted pushing over a referee.

But were defamation not an issue, Jacobson still wouldn’t like to see racial slurs and violence mirrored in Football Manager – because it’s “not something that I like to see in the real world”.

“From that perspective, I’m quite glad that it doesn’t occur in our parallel universe,” said Jacobson. “And it’s also perhaps a way that we can help to steer society a little bit.

“If we did ever have incidents of racism, hooliganism or homophobia in the game, the punishments would be a lot harsher than they are in real life because I believe they should be,” he added. “But it’s probably good that all of it is kept away because you wouldn’t want your club banned from competition because of half a dozen idiots.