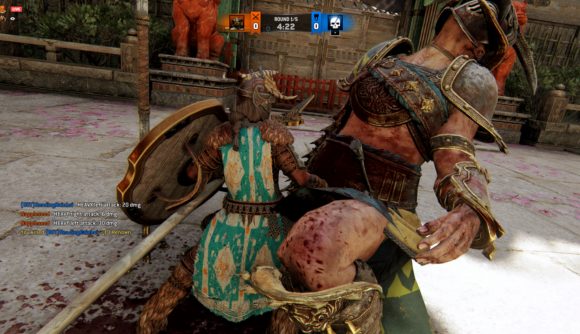 The best gaming April Fools jokes remain those where an online game does something absolutely ridiculous for 24 hours. Overwatch has glued googly eyes on all its characters, for example, and now For Honor is in on the fun, too. Every player fighter in Ubisoft’s not-actually-historical brawl is now tiny.

‘Why’, you ask? ‘Why not’, I say. “As part of Year 4, Season 1: Hope, we want to see the game from a very different perspective,” the devs say on the official site. “Enjoy playing as Orochibi, Shugokito, Very Lowlander, Ara-smushed-a, Shortmungandr, and the rest of the roster! Even the Prince of Persia himself has been brought down to size! We’ll see you on the battlefield, Warriors! As long as you’re not standing behind something.”

Sure, the pun game may leave a bit to be desired, but For Honor’s subreddit is now filled with delightful clips and screenshots of tiny fighters doing very silly things. Some are re-enacting Attack on Titan. Others are looking for their lost moms.

Others are marveling at the animation glitches that are letting fighters do wildly inappropriate things to each other.

Aside from the Star Wars one, this is my favorite event. I toast and offer the mighty pp grab. from r/forhonor

Check out out some other multiplayer games, if you need to be regular size for the rest of the day. But where’s the fun in that?