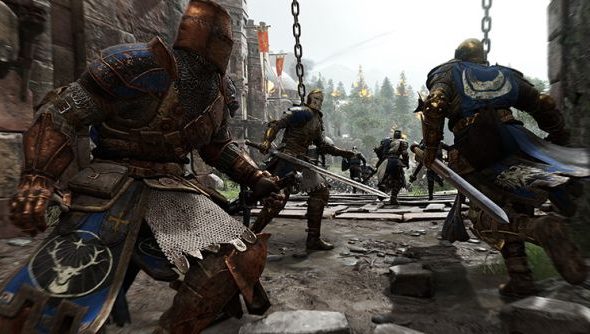 For Honor is Ubisoft’s latest new IP, a medieval melee-focused small-team and objective based multiplayer combat game. It looked rather good at E3, though there weren’t a lot of details on how it would play or why, exactly, samurai were fighting knights for castles with capture points. A recent closed alpha test with limited invites – and a fat NDA – gave the development team feedback, some of which they’ve chosen to share.

What are you excited for on the horizon? Here’s the best upcoming PC games.

The three things community man Emile Gauthier chooses to focus on in his roundup are learning curve, balancing and character platystyle diversity. Rather than explaining anywhere they plan to improve or what needs changing, instead they make sure to let us know that they’re doing quite well in all three. Well done, folks.

56.61% of players said they found the game easy to learn. That’s what Ubi want, combined with a high skill cap to keep folks interested in getting better. Three quarters of players confirmed that they felt they were improving as they played, covering that angle. Of these two stats, the former seems a little on the low side, depending on how the other 45% of players answered. If they found it impossible to work out, there’s a problem there.

Balancing was all map-focused, with attackers and defenders splitting things evenly. Sanctuary Bridge – whatever that is – had a 45/55 win ratio in favour of defenders, suggesting a little bit of work could go in there, but for first blush it’s still surprisingly even. From what I remember of other games with similar scenarios, like going first in Hearthstone, keeping it to around 52/48 at worst is the general aim.

Meanwhile players reported that the two available Heroes managed to feel varied in how they played, with one focused on quick attacks and the other being more of an all-rounder. In a game with such small teams, 4v4 rather than gaming’s current standard of fives or sixes, it’s vital that each character feels unique.

Hopefully we’ll get some more info on what isn’t so great, how For Honor’s improving and when we’ll all get to play it soon. Release is still scheduled for some time in 2016.