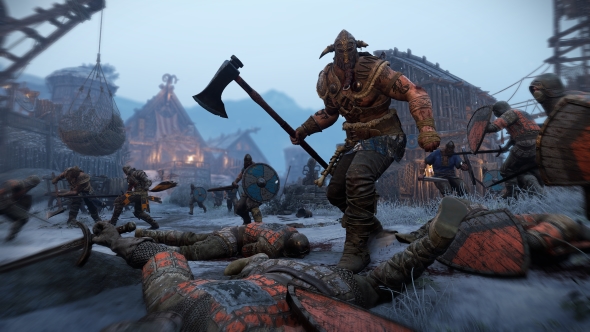 Ubisoft Montreal seem to be taking the Rainbow Six Siege practice of constantly updating their game post-launch until it’s as finely balanced as a snail crawling along the edge of a straight razor. This week they’ll be launching a number of patches, with the first aimed at dealing with auto-block cheats and fixing an incompatibility issue players have reported with mobile Nvidia graphics chips not allowing fullscreen. But there’s plenty more on the horizon for the multiplayer medieval brawl ‘em up.

Want help figuring out which warrior to take into battle? Check out our For Honor class guide.

A second patch that’s due out this Friday hopes will bring some new cosmetics to the game, including Ornaments, which will help spruce up each warrior’s headgear and a new Whirlwind effect that will be useable by every character. This minor content was initially due out today, but has been delayed to tomorrow. Finally, there’s a live patch that’s also slated for Friday, but could also come out early next week, that will hopefully resolve the following:

A number of upcoming fixes, buffs and nerfs were also announced during Ubisoft’s weekly For Honor livestream that don’t have dates: Raider and Lawbringer buffs, weekly live patches from now on, and a Warlord nerf at some point in the future. Ubisoft also mentioned that their current plan for buffs and nerfs is to buff the weaker characters rather than nerf the strong ones – Warlord being an exception.