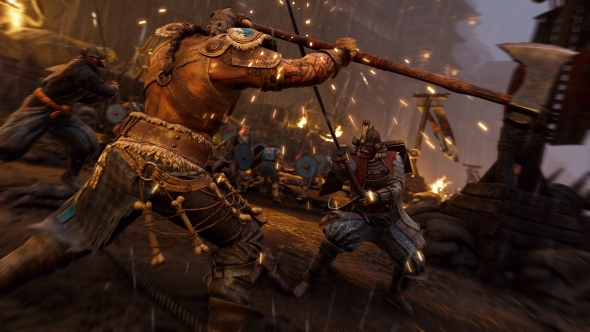 Update: Earlier today, For Honor fans were arranging a boycott of the game in response to a lack of communication from Ubisoft on the future of the fighter. Less than 24 hours later, Ubisoft have responded. The game also got a sizeable patch. The boycott may still happen, for some reason.

“I can confirm that the team went through all the points you raised and we will be addressing them,” said a Ubisoft representative on Reddit. They’re also holding a livestream tomorrow, in which they will lay out some of thier future plans.

If you’re bored, get excited about these upcoming PC games.

On top of this, an update released today makes it easier for players to earn Steel, compensates players with Champion Status for a recent service outage, unlocks new outfits for each hero, and reintroduces the River Fort map.

In an update on the original post, the boycott organiser says: “After reading many comments it appears that most of the community believe that we should continue with the Blackout. This is a step in the right direction on the side of Ubisoft, however the community seems to still want things addressed. Tomorrow we will decide for sure after the livestream.”

Original: Slightly odd way of showing your appreciation for a game this, but there’s no stopping an angry batch of fans. Disgruntled with how Ubisoft are talking to their players, the For Honor subreddit is organising a boycott of the game starting April 3. The thread announcing such has already received over 9,000 upvotes since being posted late yesterday. It is intended to last for 24 hours.

The “goal,” as poster jbaayoun put it, is to receive a response from Ubisoft about a number of issues. Most notably, they want to see more communication about issues with the game, claiming that previously things have been “very vague and have left us with more questions than answers.”

Beyond that there are specific demands for answers on future plans for the game, plans for the Steel micro-transaction currency, matchmaking problems and actual ETAs. Jbaayoun concludes with “In general, Ubisoft, we want you to communicate with us. We know you can do a good job with this game and we have faith in you. Just give us a reason to stay faithful.”

The thread is a result of jbaayoun seeing support for the idea in a thread a few hours before this one was made, reading all the comments and coming up with the list of demands. Ubisoft are yet to respond to the thread, or reference it on social media.

Whether it will work or not we’ll find out on Monday. It’s unlikely that the 10k-or-so folks who’ve upvoted the the thread will all boycott it, but they could have a significant effect on the game’s playability on the day. The Steam PC community – which represents only some of the players, as the game is available through uPlay – has dropped off since launch, but maintains enough concurrents to find a match.

For reference, there are regular tweets from the official For Honor account about planned maintenance. Eric Pope, who did much of the pre-launch communicating on Reddit, is on parental leave until late April but was a regular contributor before that. His replacement has made regular posts on the subreddit about a variety of topics. Their thread about a livestream designed for community content was downvoted and locked. Various threads on the Ubi-hosted forums also see official responses.