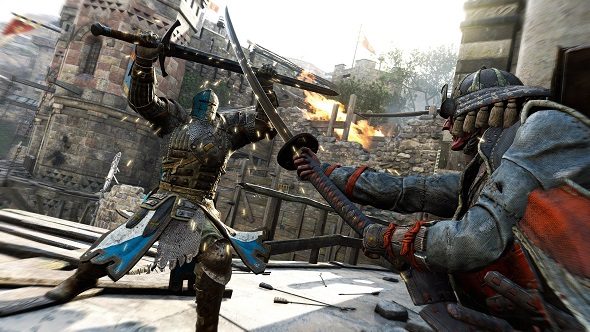 Back for another special Super Bowl edition of Clueless Gamer, Conan O’Brien pit Tom Brady of the New England Patriots against Dwight Freeney of the Atlanta Falcons to help predict the outcome of tonight’s Super Bowl. Rather than on the gridiron, battle was to be joined in Ubisoft’s For Honor, with one on one duels truly deciding the winner of the Super Bowl. As with most episodes of Clueless Gamer, the duels were more frantic flailing than epic battles to the death.

Here are some helpful For Honor tips to help on your first battlefied sortie.

The first clash between Brady and O’Brien saw them fighting the camera more than each other, with both looking equally as lost on the battlefield. They eventually came to blows, with two of their three matches ending with someone dying via falling off a high ledge. I doubt either of these two will be taking up competitive For Honor anytime soon. While Brady won this first bout, him calling the controller a remote must draw a penalty flag.

Following that warm up round for Brady, it was the turn of the Falcons’ Freeney to fight against the Patriots’ quarterback in a match that would predict tonight’s result. I’m surprised neither Freeney or Brady pick the Viking Raider, as he’s the closest warrior to an NFL player with his ability to tackle opponents. After a tense few games and some accidental deaths, Brady was declared the victor so place your bets on the Patriots to win tonight.

After this intense battle, fellow Patriots Rob “Gronk” Gronkowski and Legarrette Blount joined in on the fun, as well as former Clueless Gamer guest Marshawn Lynch for some final games. It resulted in yet another Patriots win, with Gronk romping to victory against Lynch.

There was nothing particularly new to see in this For Honor showing, as most players have been able to get their hands on the competitive hack and slasher with the recent beta programs. Still, it’s always good to see Lynch popping off some more. For Honor launches on PC February 14, the perfect Valentine’s gift for the shield brother or shield maiden in your life.