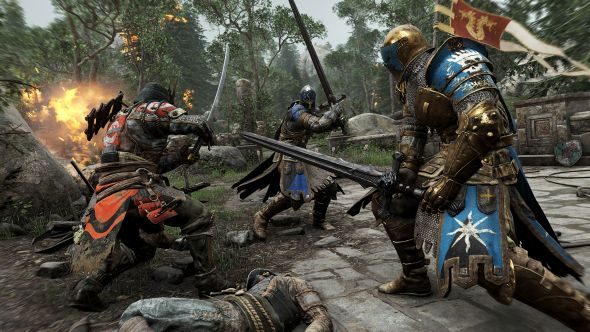 For Honor looks, well, different. Factions of vikings, knights and samurai. A fighting system that tries to straddle the line of intense medieval-style complexity and, y’know, still being fun. A ludicrous story and single-player in a game that so clearly seems to suit a multiplayer-only release. And: diversity. Loads of it, in fact. Game director Jason VandenBerghe explained in an interview with Gamespot that “it’s a core value on the team, and a list of things I’m proud of.”

One of many much-anticipated upcoming PC games.

It’s not as simple as just selecting from a batch of men and women, either. Of the twelve available classes, fully half can choose their gender, with the remaining eight split evenly. “In each faction there are two heroes that are dual gender, male or female,” explains VandenBerghe, “and then there’s one hero that is male only and one hero that is female only, for all 12, so it’s 50/50 all the way across.

“This game isn’t about us creating characters and imposing them on you. This game is about you. And so what kind of warrior are you, right? You can change the skin color of your Vikings, too. You want to have a black Viking? Knock yourself out. It’s who are you. I want you to be able to be in that game. I play the female warden. That’s my favorite character, because she’s great. And it’s always been, from day one, it’s been the core value of the team, and we’ve been doing this for a while.”

In fact, says VandenBerghe, they’ve put so much work into diversifying the characters – both in terms of the way they fight and how they look – that he considers it a central part of the game. Asked what he hopes players pick up on when they play, he responds “It’s easy for people to look at the game and say, ‘Oh, that’s ok,’ and brush it aside. And it’s really a game for everybody, it really is. It’s so easy for people to say, ‘Oh, it couldn’t be true, they couldn’t have full gender representation and different ethnicities in a game like this.’ So we put a lot of time and effort into that, and it’s a core value on the team, and a list of things I’m proud of. I hope that reaches people.”

Do check out the full interview for way more on the game, including how the fighting system was built.