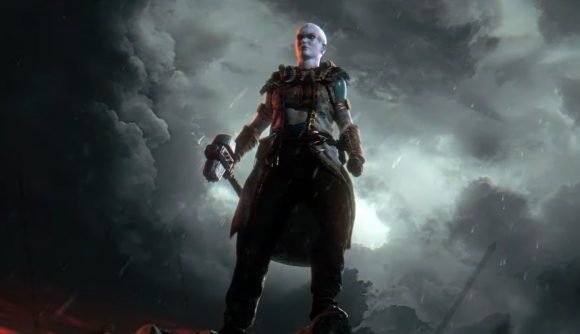 Ubisoft has lifted the veil on the new playable hero for Year 3 Season 3 of For Honor. Jormungandr is a hammer-wielding hero for the Viking faction, and as with all the Year 3 heroes, will be available in male and female variations. We’ll see a proper unveil of the new season later this week, but for now the developers have given us a cinematic look at Jormungandr.

The teaser focuses on Hulda, the female variation. (The male is called Gretar.) It features plenty of appropriately metal aesthetics, from the War Hammarr and stormy clouds to red lightning to the massive mythical serpent which gives us Jormungandr’s name. In For Honor’s lore, the Jormungandr are a viking sect devoted to the serpent, and they want to destroy the weak before Ragnorak comes.

Check out the teaser trailer below. (You can get the UK mirror here.)

The new season will also bring us a new Viking-themed Breach map with Storr Stronghold, and significant balance tweaks to Nobushi, Shinobi, and Orochi.