Where is Fortnite Fortbyte 32? The clue tells us it’s accessible by wearing a Kyo Pet Back Bling at the northern most point, so get ready for a bit of a hike. Yes, that’s right, it’s time to chase down another piece of the Season 9 Fortbyte puzzle, which unlocks a new microchip every day for players to collect, eventually revealing an image. This time, you’ll need a piece of gear you get at a higher player level than we’ve seen so far.

Of course, if you’ve missed any of the Fortbytes so far, it’s nothing to worry about: once they’re unlocked, you can pick them up at any point during the season. Refer to our master list of Fortbyte locations to find the ones that have been unlocked so far, and remember to check back because we’re keeping that updated with each challenge.

You also may want to take a look at our rundown of the Fortnite Drop Down challenges, which will earn you the Sweaty Back Board back bling if you complete them.

Fortnite Fortbyte 32 location: Accessible by wearing a Kyo Pet Back Bling at the northern most point

The location for this Fortbyte is pretty straightforward, but it is in a somewhat out-of-the-way place for most Battle Bus routes. The northernmost tip of the island is found in map square 1C, just north of Junk Junction. I’ve marked it on the map below. 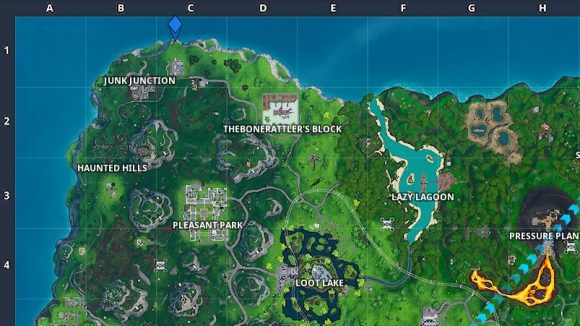 Head that way from the Battle Bus and look for a promontory on the coast. You’ll know you’re in the right place when you see a small signpost in the ground, marked with an ‘N’ and a compass rose. 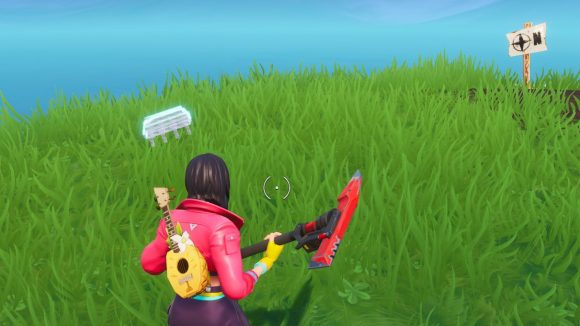 If you’re facing north, the Fortbyte will be just off to left-hand side of the sign. Here’s the catch, though: You’ll need to be wearing the Kyo Pet back bling, which unlocks at Tier 28. If you haven’t leveled your pass up that high yet, you’ll have to wait and come back for this one later. Otherwise, make sure you’ve got that equipped before you start the round, and the Fortbyte will be sitting there waiting for you to pick up.

And there you have it, Fortnite Fortbyte 32 is in the bag! There will be another one unlocking tomorrow, though, so don’t get too comfortable just yet. We’ll have directions on how to get that one shortly after it goes live, so stay tuned.