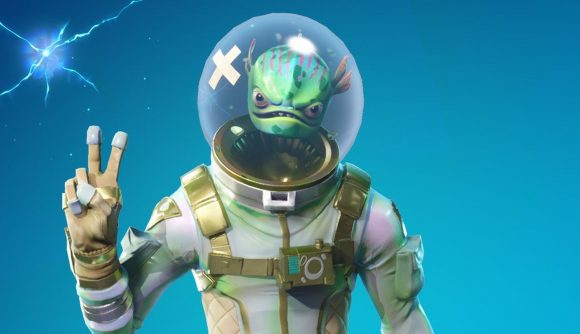 The new Pump Shotguns are fashioned after a real-life weapon. While Fortnite’s high-tier assault rifles are copies of the SCAR and Famas rifles, the new boomsticks are designed to look like the SPAS-12 shotgun, which is used by police and special forces across the world.

The gun also happens to be the weapon of choice of one John Muldoon. You may remember him as the gun-toting game warden in the original Jurassic Park film (played by Bob Peck), and it’s that character that Fortnite’s latest easter egg calls back to. As pointed out on Reddit by user Lady_Jaye, the barrel of the new shotgun is embossed with the text “SMRT YNG LDY 110693.” And as Lady_Jaye points out, that’s an enjoyably cryptic tribute to both Jurassic Park and Muldoon himself.

You don’t get any prizes for guessing that those letters spell out a simplified version of “Smart Young Lady.” That brief phrase is synonymous with “Clever girl” – the phrase Muldoon utters in his now-iconic final moments, before he’s torn apart by velociraptors. As for 110693, that’s the date of the film’s original release – Jurassic Park first hit cinemas on June 11, 1993.

Hopefully, the new Legendary and Epic Pump Shotguns give you a bit more luck than the SPAS-12 offered Muldoon. They should – after all, their release coincides with a massive accuracy buff for the entire weapon class, making it far easier to see off your opponents. As for how effective they are against dinosaurs, we’re yet to find out.