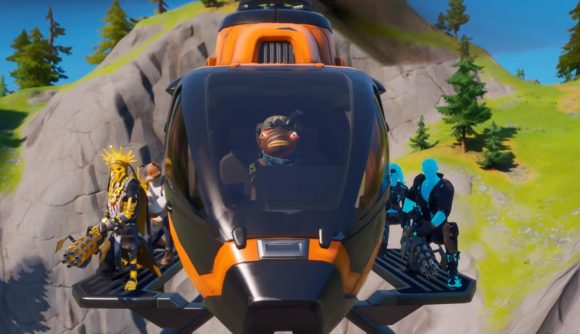 Fortnite’s 12.20 update is now live, bringing with it helicopters, a new limited-time game mode, loadout presets, and some weapon tweaks. It’s not all good news, though, as one of the game’s locations is now looking worse for wear following the recent patch.

The new choppers are likely to cause the most excitement as we haven’t seen airborne vehicles in Fortnite for over a year. While the X-4 Stormwing plane came with a gunner turret, The Choppa is mainly designed to help you ferry your squad across the map. Don’t worry, your crew can still perch themselves on the side and shoot at foes – just watch that ammo.

If you want to find a Choppa, chances are you already know where to look. Helicopters pads have been a part of Fortnite’s secret bases since the start of Season 2, and you can find a Choppa waiting there for you on any one of them. Oh, and once you’re inside of one, you can play Wilhelm Richard Wagner’s Flight of the Valkyries on loudspeaker – a true banger.

Battle Pass owners also have access to a limited-time game mode called Spy Games. If you want to try it, drop into Operation: Dropzone to access it. Once you’re there, you can use a new tech system to snag perks that give you an advantage against foes in the Spy Games. There are three special challenges, too, and they each offer 80,000XP.

Also, Pleasant Park's football pitch has been transformed into a helipad: pic.twitter.com/OBFu3tXFsf

Fortnite’s map has undergone some minor changes. It turns out the football pitch in Pleasant Park has been hiding a helipad, and the Oil Rig has been blown to bits. We don’t know why, but more details may follow.

There are other smaller additions, too. Players can now find loadout presets in their locker, which allows them to save a combination of skins, gliders, and pickaxes.

Explosion delay between each C4 is increased from 0.3sec to 0.5sec!

On top of that, it looks like there have been some minor weapon tweaks. As Fortnite leaker Hypex notes, the explosion delay between each C4 has increased from 0.3 seconds to 0.5 seconds, and the Grappler has a short delay now, too.

If you’re looking to sink your teeth into something similar while your patch downloads, we’ve wrangled up the best FPS games and battle royale games, and put them on two handy list features.