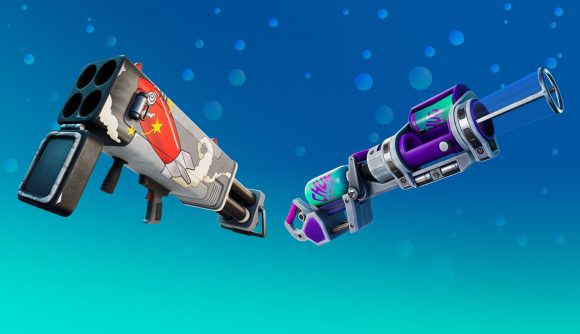 We’ve still got over a month left in Fortnite Chapter 2 Season 5, and there’s more to come before Season 6 rolls around. Epic has confirmed the precise Fortnite 15.30 release time, and uncharacteristically has even offered a brief look at what to expect from the update, including a new LTM, some new exotics, and additional Creative Mode options.

Downtime for Fortnite’s 15.30 update begins on February 2 at 1:00 PST / 4:00 EST / 9:00 GMT, so you can look forward to diving into that new content pretty early in the morning. Downtime for these mid-season updates does not typically last very long, but it’ll give you a chance to get the new files downloaded.

A news message confirms that the two new exotics in this update will be the Burst Quad Launcher and the Chug Cannon. The former looks to be some sort of variant of the previously-vaulted Quad Launcher. The Chug Cannon looks to serve a similar role to the Bandage Bazooka as a ranged healing option.

The update will also include the Mando’s Bounty LTM and “new devices and options for Creative”.

The Fortnite Chapter 2 Season 6 release date is just around the corner, so you can follow that link for details on what to expect.