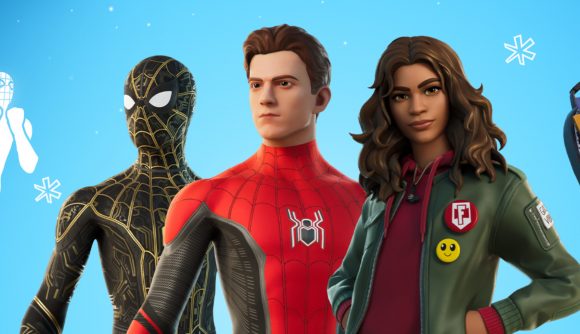 We’re closing in on the end of the first season of Fortnite Chapter 3, but there’s at least one more big update before Season 2 lands. Epic has confirmed the Fortnite 19.40 release time, and has offered a quick tease for what’s coming, too, and it sure sounds like we’re getting some more Spider-Man here.

Fortnite goes down for maintenance ahead of 19.40 starting on March 1 at 1am PST / 4am EST / 9am GMT. (Matchmaking will be disabled 30 minutes ahead of that time.) Downtime can last up to a few hours, but it’s typically much shorter than that, so you’ll be playing with the new features of 19.40 on the morning of March 1.

Epic says that we should “prepare to Swing” into this update, which is the only official teaser we’ve gotten so far. In the announcement blog for Chapter 3 Season 1, Epic told players to “look out for new Spideys (plus a few friends and foes) dropping into the Item Shop throughout the season”, and it seems very likely that it’s time for that promise to be fulfilled.

Epic’s certainly going deeper with the Marvel collabs, as an upcoming crossover coming seems to be hinting that a Shuri skin is on the way.

Prepare to Swing into the v19.40 update scheduled for release on March 1st. Downtime will begin at 04:00 AM ET, with matchmaking being disabled 30 minutes before. pic.twitter.com/w4reKqLeum