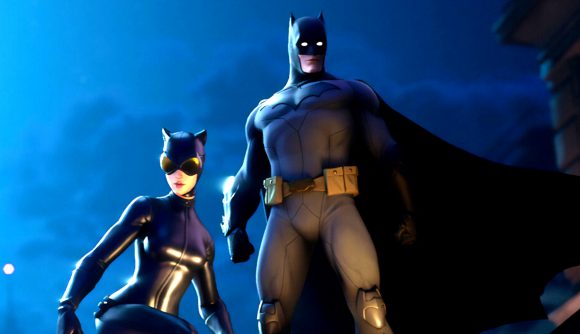 The devs put Batman and Catwoman in Fortnite, so I guess they had to take out the oral sex. A new emote called Bear Hug was intended to allow players to, well, hug each other, but players quickly found a glitch that allowed one of the participants in the hug to crouch. That glitch had, uh… suggestive results, so Epic has temporarily disabled the emote and plans to offer refunds.

“We’ve temporarily disabled and removed the Bear Hug emote from the Item Shop. We’ll let you know when it’s available again,” Epic says in a tweet. “The Bear Hug emote will remain disabled while we fix an issue with the emote. Players who have already purchased the emote will be able to make a tokenless refund sometime next week.”

Epic doesn’t mention what the ‘issue’ is, but as Eurogamer notes, players immediately realised the problem. If one player crouched while entering the emote, one of the participants would remain crouched during the hug. That means their face would be right in their partner’s crotch. Like oral sex.

It’s funny, but come on, let’s not be immature about it.

HELLO????
WHY DID SHE GO IN TO HUG LIKE THAT pic.twitter.com/BGYdTjGIud

Anyway, the Ariana Grande concert is happening this weekend, and Epic’s swiftness in dealing with the glitch might have something to do with the fact that the Ariana skin appeared in a viral video demonstrating the issue. People don’t like it when their likeness is used for unauthorised sex in videogames, it turns out.

The Bear Hug emote will remain disabled while we fix an issue with the emote.

Players who have already purchased the emote will be able to make a tokenless refund sometime next week.