Earlier this month, some leaks surfaced indicating monthly Fortnite subscriptions might be on the way. Well, it turns out that’s indeed correct – Epic Games has announced that it’s bringing a subscription model to the battle royale game called Fortnite Crew, kicking off with the upcoming Chapter 2 – Season 5.

Called Fortnite Crew, the subscription will be priced at £9.99 (or equivalent) per month, Epic announces in a press release. Included in the subscription is full access to each Fortnite season’s battle pass, as well as 1,000 Fortnite V-Bucks each month to spend in the multiplayer game’s shop, and a monthly content bundle called a Crew Pack. As reflected in the earlier leaks, this contains a guaranteed new outfit and at least one accompanying accessory in each drop, and they’re exclusive to subscribers – so, you won’t be able to scoop up the content of these Crew Packs any other way.

Fortnite Crew subscribers will get access to a Galaxia outfit and style, Cosmic Llamacorn Pickaxe, and Fractured World Back Bling when the subscription launches on December 2.

You can take a look at these items in the image below: 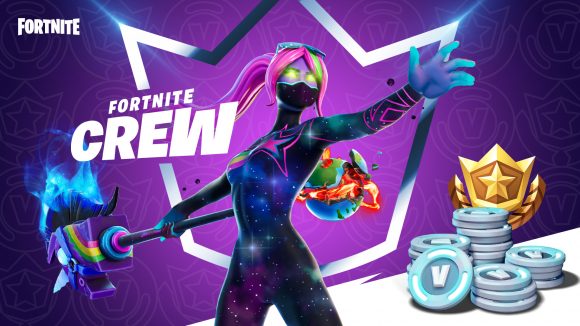 If you decide to go for Fortnite Crew, you can sign up either from the game’s item shop or battle pass purchase page. Epic explains that players can cancel their subscription at any point, which you can do via your device’s Fortnite Crew page in-game, and the studio says you’ll continue to have access up to the end of your billing period if you’ve cancelled.