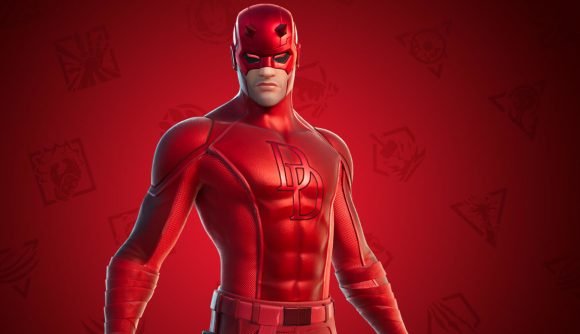 The Marvel season rolls on, and Fortnite‘s soon getting a Daredevil skin – but it’ll be part of the item shop, not a secret unlockable or a late addition to the battle pass. You’re still going to have the chance to get it for free, but only if you’re very good with this season’s heroic super powers.

The Marvel Knockout Super Series is a set of four competitive cups that’ll build up to a $1 million USD tournament on November 21. That kind of money is certainly intended to bring in the pros, but Epic’s offering some smaller incentives to interest everyday players, too. For example, by simply participating in all four of the normal cups, you’ll get the exclusive Nexus War Glider.

The first event of the series is the Daredevil Cup on October 14. The cup will use the Marvel Knockout format. Each trios game places you in a tournament bracket, equipped with super powers to survive each four-round knockout battle. Your tournament placement will earn you points – 100 for first place, 50 for second, 25 for third or fourth, 14 for fifth through eighth, and five for ninth through sixteenth.

At the conclusion of the tournament, the top teams on each leaderboard will each receive the Daredevil skin. That’ll be the top 800 teams on European servers, top 500 on NA East, top 200 on NA West, top 200 in Brazil, and the top 100 respectively on Asia, Oceania, and Middle East servers. You can see the full rules on the official site.

With three more Super Series cups to follow before the final tournament in November, it’s likely we’ll see some more incentives for players outside the usual competitive scene to hop in. After all, there are plenty of Fortnite skins left to run through, and Epic hints that the tournament will continue to offer “early access to new Marvel outfits”.