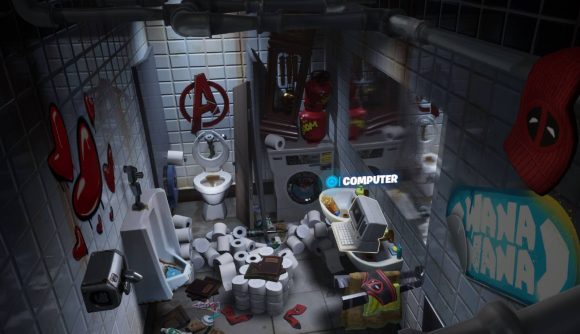 Fortnite Chapter 2, Season 2 recently kicked off with spies, map changes, and one very special guest – none other than the wise-cracking anti-(super)hero, Deadpool. There’s a themed skin up for grabs with the new season, but it now seems there are some pretty killer weapons on the way, too.

That’s according to dataminer Spedicey1, who has tweeted some findings in the game files referencing ‘Deadpool’s dual pistols’ under the codename ‘Donut’, also offering a run-down of their stats. The weapons’ close damage is reportedly set to 43.0, mid to 36.55, and long to 32.25, and the pistols have a clip size of 18. Re-loads should take 2.7 seconds, according to the post. That’s not bad, and would make you a pretty decent threat at any of the three ranges.

Alongside the Deadpool weapons mentioned, it seems there’s another mystery weapon titled ‘MistyBop’ on the way. It’s not clear what this might be from the files so far, but it’s apparently a rare type weapon, capable of dealing 50.0 damage, carrying an infinite clip size and five-second reload time. Hmm.

Some recent Fortnite leaks indicated some new weapons were on the way to the game, including a rare ‘SlugFire shotgun’, but there was no sign this might be the ‘MistyBop’ weapon. Guess we’ll have to wait and see what this is.

These findings are far from confirmed, so it’s not clear if or when they might head to the battle royale game’s live servers. However, if you’re keen to check out what is already up for grabs in the new update, check out our guide on how to get the Fortnite Deadpool skin.

Also be sure to check out our Fortnite bosses (how to break into all the secret vaults), Fortnite Agency HQ (how to open the vault), and Fortnite security plans guides to help you get the most out of the new season before the Fortnite Chapter 2, Season 2 end date rolls around.