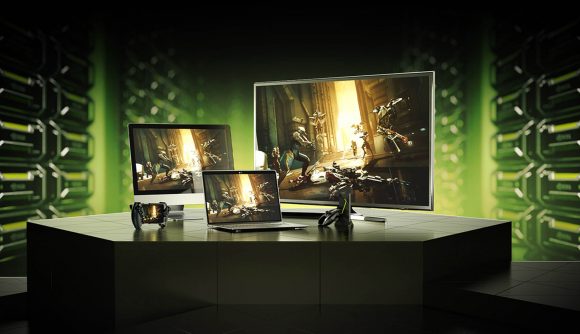 “Epic is wholeheartedly supporting NVIDIA’s GeForce NOW service with Fortnite and with Epic Games Store titles that choose to participate (including exclusives),” Sweeney tweeted March 6. “And we’ll be improving integration over time.”

Sweeney went on to say that he believes GeForce Now is the most developer- and publisher-friendly streaming service, due in part to the fact that it charges no ‘tax’ on game revenue. “Game companies who want to move the game industry towards a healthier state for everyone should be supporting this kind of service,” he said.

Sweeney’s tweets suggest that any games available on the Epic Games store could be played through GeForce Now, although he implies that developers will have to opt in for their games to be included. But Epic Games store exclusivity won’t be a barrier to having their games playable on GeForce Now – if you own the game in your Epic library, Sweeney’s feeling is that you should be able to play it on Nvidia’s streaming service.

Sweeney suggested that GeForce Now could prove to be an important factor in breaking the market dominance of iOS and Google Play, which he says both charge 30% on payments made through their systems, and went so far as to call Apple’s refusal to allow streaming services on iOS “megalomaniacal.”

It’s the most developer-friendly and publisher-friendly of the major streaming services, with zero tax on game revenue. Game companies who want to move the game industry towards a healthier state for everyone should be supporting this kind of service!

“Just waiting till later this year when Google is lobbying against Apple for blocking Stadia from iOS, while Google blocks GeForce NOW, xCloud, and Fortnite from Google Play, and this whole rotten structure begins collapsing on itself,” Sweeney wrote.

Nvidia says more than a million players have signed up for GeForce Now so far.