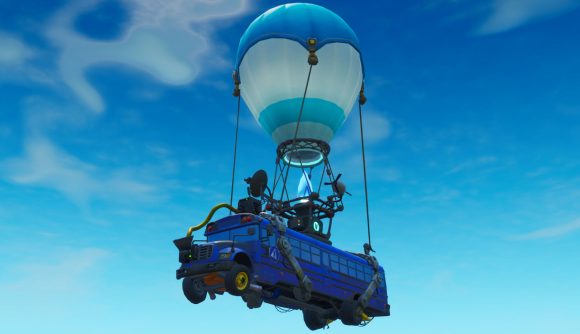 It looks like the next Fortnite Season could see you sink or swim – literally. There have been hints and rumours swirling about what the battle royale game’s next adventure will bring when the Fortnite Chapter 2, Season 3 release date rolls around, including suggestions its map will be flooded – and now it looks more likely that’ll be the case.

Recent datamines have revealed findings pointing to a decidedly watery start to the next Fortnite Season, such as new underwater swimming animations and poster teasers showing Meowscles with flotation armbands, a determined-looking shark eyeing a swimming Peely hungrily, and even a building floating precariously in a rubber ring. In addition, in early May Fortnite players started discovering puddles scattered about the game’s map.

Now, on the PlayStation Store – as of this story – there’s a brand-new icon that appears to hint a flood could be on the way. As you can see in the images below – which haven’t yet been shared officially by developer Epic Games on the multiplayer game’s social channels or site just yet – the Fortnite Battle Bus is flying perilously close to the open sea in the updated icon.

Plus, there appears to be a little island popping out from between the waves a little in the distance. Hmm.

#Fortnite Season 3 Icon Has Been Leaked On Playstation! 👀 pic.twitter.com/CNitJdP1qc

As user @FNBRHQ (Mikey – Fortnite Leaks) points out on Twitter, this little island looks somewhat similar to the one used in the Desert Island Flare Fortnite clip from summer 2019, though it’s not clear if or why there might be a connection with this.

It’s worth noting there’s no confirmation as yet what the plot of the upcoming Season will be, or whether it will indeed take players down into the deep blue – but it looks at least likely it’ll see players heading underwater to some extent. Fortnite Chapter 2, Season 3 was delayed but it’s just around the corner, now, landing on June 11 – so it won’t be long before we find out.