Where is Fortbyte 20 in Fortnite? This is a kind of unique Fortbyte, because there isn’t any specific location to point to. While the Fortbyte challenges this season have sent us to all the corners of the Battle Royale map, this particular challenge is literally a moving target, so you’ll have to be ready to do some of your own hunting, even with our handy tips.

In truth, this Fortbyte isn’t too tough to get as long as you’re mentally prepared for the task. The key is understanding the rules of Battle Royale, and being ready to make a beeline for your target once it’s appeared. If you play your cards right, you’ll be able to scoop this Fortbyte up almost as soon as you touch the ground after leaping off the Battle Bus.

Fortnite Fortbyte 20: Found at the center of any of the first three Storm Circles

Fortbyte 20 will be in a different location – or rather, different locations, plural – during every match, and that’s dead center of the circles that form a few minutes after each match begins. The first one is the largest, but it’ll be your best bet for grabbing Fortbyte 20.

Once you’re in a match, wait until the Battle Bus is near the center of the island. Hop out and deploy your glider right away. That done, just kind of hang out. What you want to do is wait for the storm to form, which will place the first Storm Circle on your map. Open that up and plunk down a marker as close to the centre as you can. 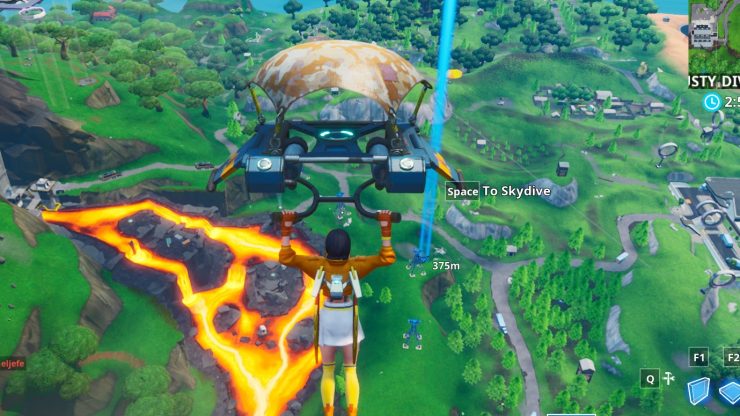 Now, head for your marker. If you’re lucky, the centre of the storm will be over a nice big piece of open ground, but chances are good it’ll be over a building or other piece of strange terrain. Just keep your eyes peeled as you make your way down to the ground, because Fortbyte 20 will be pretty easy to spot: unlike other Fortbytes, this one has a big purple lightning bolt over it, making it easier to see from above than the normal Fortbytes.

The position will change as the storm contracts though, so if you’re too far away from the centre of the first circle, you’ve got two more chances to get in position and grab Fortbyte 20.

That’s all there is to it! Fortbyte 20 is a bit of an oddity, and we’ve got guides to help you complete the rest of the Fortnite Fortbyte challenges that have popped up every day since the start of Season 9. You also may want to check out our guide to the Fortnite Downtown Drop challenges, which you can do to earn sweaty skateboard back bling.