Where is Fortnite Fortbyte 80? What’s a Bunker Basher Pickaxe, and where’s this rock on the volcano’s rim? Where even is the highest point on the rim? Those are the questions you need to work out in order to collect today’s Fortbyte, and we’re here to give you the lowdown.

Fortnite’s Fortbytes are, of course, the daily unlockable puzzle pieces that come in the form of floating computer chips, and they’re hidden all over Fortnite’s Battle Royale island. A new one is revealed every day, and you need to use the clues found in the Fortbyte puzzle in order to figure out how to collect them. Once you’ve got them all, they’ll reveal a picture of some kind that hopefully tells us more about Fortnite’s current season and what’s going on. Refer to our list of Fortnite Fortbyte challenges to catch up on any you’ve missed so far. Oh, and, if you’re looking for Fortnite Fortbyte 68, you’re in the wrong place.

Fortnite Fortbyte 80, which showed up today, is a bit on the demanding side. The clue is clear enough about where to go to find it, but you’ll need some specialized gear if you want to actually collect the chip. But don’t worry, here’s how to get the job done.

Fortnite Fortbyte 80: Accessible by using the Bunker Basher Pickaxe to smash the rock at the highest point of the volcano rim

The first part of the clue tips us off to the arduous part of this task: earning Bunker Jonesey’s Bunker Basher pickaxe. While it looks a bit on the cheap side – it’s just a segment of steel beam with a smiley face painted on it, strapped to the end of a stick – it doesn’t unlock until Tier 38. You can earn it without owning a Battle Pass, but you will need a Battle Pass to collect Fortbytes.

Equip the Bunker Basher and jump into a match. You’re going to make your way for the volcano that’s leaking lava from its southern approach, with Pressure Plant located in its crater. The point you’re looking for is on the northeast lip in grid square H3.

Watch your step while you’re on the volcano’s rim! Keep an eye out for a small patch of rock sticking out of the ground. It looks like this: 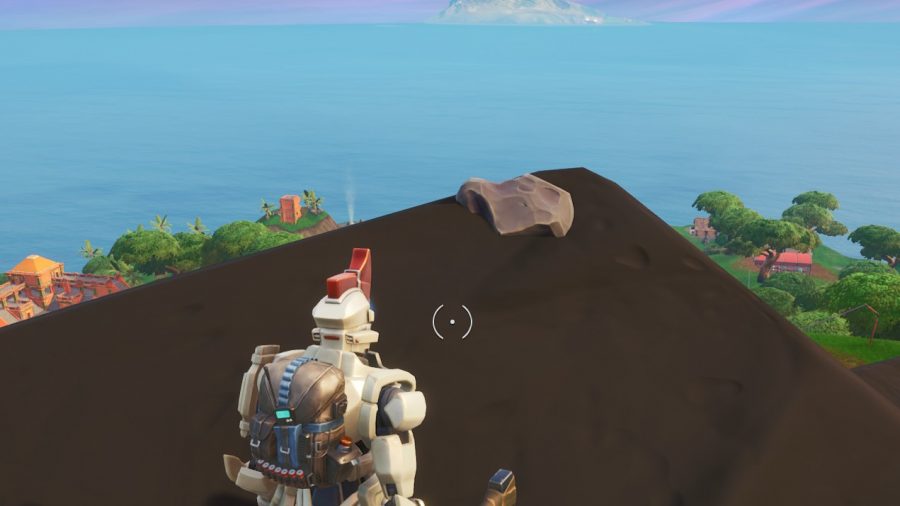 Smash that with your Bunker Basher, and the Fortbyte will appear.

And that’s how you use the Bunker Basher Pickaxe to smash the rock at the highest point on the volcano rim to pickup Fortnite Fortbyte 80! There are still plenty more Fortbyte Challenges to go, and we’ll be here to guide you if you ever get stuck. Happy hunting!