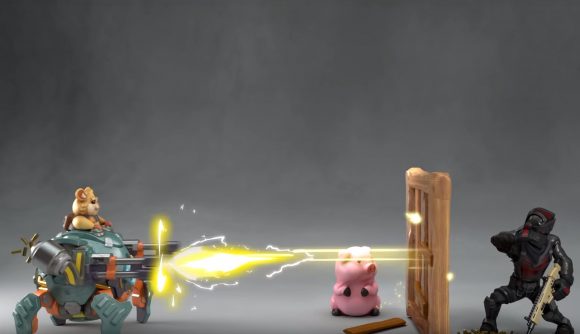 Pop culture has thrown up some epic crossovers over the past few years. Super Smash Bros Ultimate is just around the corner, the Avengers cast list seems to be expanding with every passing film, and the less said about that Simpsons/Family Guy thing the better. But the title of “the most ambitious crossover event in history” may finally have been decided.

YouTuber 3D Print Guy, whose previous work includes time at Pixar, posted a video to Reddit yesterday showing off an epic battle between Overwatch’s Wrecking Ball and Fortnite’s infamous Black Knight. For some reason, it also features Waddles, who you may know better as the pig from cartoon Gravity Falls.

The battle seems to start out in Hammond’s favour, as his outer shell – Wrecking Ball – seems to be able to soak up an entire clip from the Black Knight’s SCAR assault rifle. But given that the Fortnite character can simply build a blockade to keep himself safe from any of Hammond’s attacks, the pair quickly find themselves at something of a stalemate.

You can watch the entire clip as it was posted to Reddit below, or check out 3D Print Guy’s animation process on YouTube. I won’t spoil it for you, but my personal highlight is the moment that the Knight nonchalantly drops a bunch of wooden panels on top of Hammond.

I made an animation of Black Knight vs Hammond from Overwatch…. Because… i thought it’d be cool. from r/FortNiteBR

It’s been a busy time for both Fortnite and Overwatch recently. Blizzard’s hero shooter recently welcomed Ashe and Bob, while Fortnite is set to usher in its seventh season (as well as a limited time gifting system) in the coming days. It’s just a shame there’s no way to get a definitive answer when it comes to the question of which shooter is better…