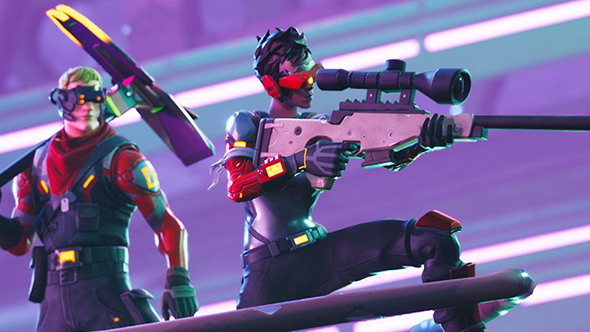 Update, May 15: Surprise! The new Fortnite update scheduled for today will actually go out tomorrow.

Fortnite’s regularly scheduled never actually happened this morning, since Epic discovered a bug that led them to delay version 4.2. Now they’ve just confirmed that the new update, which brings new burst assault rifles to the game, will go live tomorrow.

Shoot at or alongside your friends with the best multiplayer games on PC.

As Epic note on Twitter, that puts downtime for the new update at 1:00 PDT / 4:00 EDT / 8:00 GMT on May 16, exactly 24 hours after it was originally supposed to go live. Sadly, this does not mean you’ll have another chance at the Infinity Gauntlet mode, because it’s already gone.

Original story, May 14: Fortnite’s 4.2 update hits tomorrow, and Epic have just let slip that a new weapon variation will come as part of the patch. Today’s update message now shows the burst assault rifle will get variations at epic and legendary rarities when the update lands.

Epic confirmed via Twitter earlier today that downtime for patch 4.2 will begin at 1:00 PDT / 4:00 EDT / 8:00 GMT on May 15. According to their typical teases using very specific language, they tell players to “burst onto the battlefield” – an almost certain reference to these rifles – and that the new patch will be “gliding in.” So some sort of glider is likely to be part of the update, as well.

The new assault rifle variations seem to have showed up on Fortnite Tracker some time ago, with damage ratings and all the other stats you could want shown for bothepicandlegendaryversions. But it’s worth noting that the weapon thumbnails on the tracker are different than the one now showing up in-game.

We’ll have more specific info on the new weapons when the update and the patch notes hit tomorrow, as well as whatever else is in store. We will also be losing a bit when that downtime finishes, since the Thanos-starring Infinity War crossover will be coming to an end.