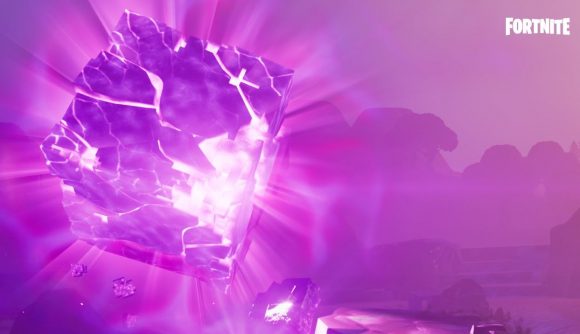 Kevin is dead, long live Kevin. Fortnite’s wandering cube has disintegrated, and everyone who logged in or tuned in got to see it vanish in spectacular fashion this afternoon. In its wake is a transformed Leaky Lake and a new set of special themed challenges.

Since this reporter spent the day chained to his news treadle, I wasn’t able to watch the proceedings live. However, Dustin was present to watch everything go down.

“The cube started rotating and glowing,” Dustin told me. “Eventually a bright flash engulfed everything, and everybody was teleported to a sci-fi white portal dimension. We just kinda… floated there for a bit.”

Dustin says a giant butterfly appeared, and then shrunk down to normal size to alight on your finger – and then another white flash, and everyone was back on the Island.

It seems like an awful lot of people watched Fortnite’s second one-time event live – in addition to everyone playing the game, ResetEra reports that more than a million people were watching live on Twitch, with around 400,000 of those coming from Ninja’s channel.

The event marked the end of Fortnitemares, and the beginning of… whatever’s next. For one thing, there’s a new set of challenges active now, all themed around “Li’l Kevin.” The challenges (gain 5,000 XP, play 15 matches, and outlive 500 opponents) were leaked Thursday, and now you can start working on them.

Here’s a video of the Event itself:

And here’s a view of the renovated Leaky Lake:

Leaky Lake is now a swamp! from FortNiteBR

There’s surely more to discover in this new, Cube-less version of Fortnite’s island map, and we’ll be exploring right along with you.