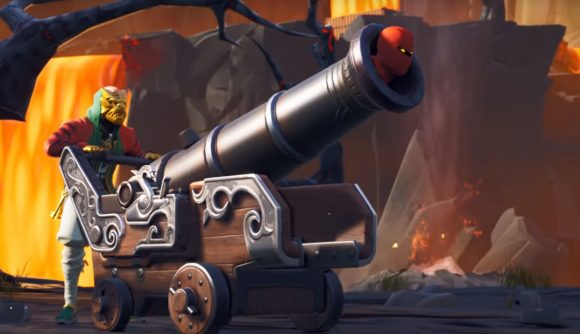 March 17, 2019 A third Fortnite death-spot has been found, this time in a field by the Volcano.

There are now three Fortnite instant-death spots lurking on the battle royale map. A week ago, players reported that stepping on a specific game tile just outside Fatal Fields would force a dramatic exit from the game. Shortly after that, a similar bug seemed to rear its head on the opposite side of the map, just outside The Block. Now a third death spot has been found, at the foot of the Volcano.

Just like the other two bugs found, this is a specific tile on the map, that when stepped on causes instant death – apparently from suicide. This new spot can be found on a random patch of grass near the lava flow of the Volcano, and was recorded by charis38 on Reddit. As you can see in the video, however, they’re certainly not the first to find it, as they were investigating a mysterious pile of loot when they were killed instantly by the murder hole – suggesting that another victim fell prey to the death spot first.

Just over a week ago, Reddit user SlevinVega posted a similar clip, pointing out a particular spot just outside The Block. Crouching down in a divot next to the named location automatically finished the player off in tournament mode, and the problem persisted when they returned to the spot in Creative Mode.

The first ‘death spot’ appeared over by Fatal Fields – the Fork Knife quarry that appeared alongside the rest of the Fortnite Season 8 map changes features a single terrain tile that instantly ends the game of anybody unlucky enough to stumble over it. The likelihood is that these particular dips cross-over with the game’s underground kill-zone, which is intended to stop players glitching under the map.

Epic says that it’s aware of the Fork Knife problem, and looking to fix it – and if some reports are correct, may have done so already – but doesn’t seem to have acknowledged either of the last two death spots. It’s also not clear whether this issue has the potential to impact other areas across the map.

Related: Here are all the Fortnite Pirate Camp locations

Elsewhere in Fortnite, you’ll need to be heading underground. Buried Treasure maps have arrived in the game since the beginning of Season 8,  but you’ll have to hope that digging them out won’t make you stumble across another death-spot.