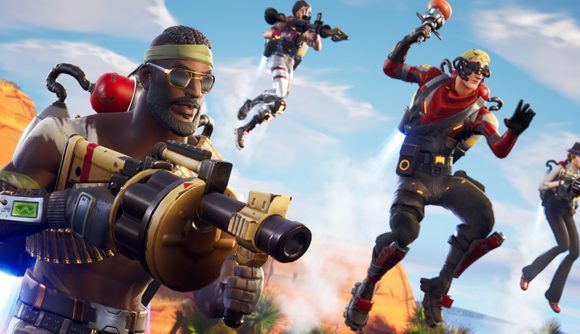 It seems as though Drake has had his Fortnite account hacked. During a recent charity livestream hosted by Ninja, the Canadian rapper looked to have joined the streamer’s matchmaking party, but it quickly became apparent that Drake wasn’t on the other end of the controller.

Ninja’s livestream, which took place on November 23, was ticking along nicely when an account seemingly belonging to Drake appeared in his group. From the moment he arrived, however, things looked pretty fishy – for one thing, the new player was using the rapper’s Epic Games account, rather than his PS4 moniker.

For another, the new player was (at least to begin with) entirely silent, leading to some obvious confusion from Ninja – who plays games with the rapper on a semi-regular basis – as he tried to figure out whether Drake had even meant to join in with the livestream. Not long after that, however, the player unleashed a string of racial slurs, clearing up any question over whether or not they were the real deal, and forcing Ninja to leave the matchmaking lobby in something of a hurry.

While the issue of identity theft isn’t exactly a laughing matter, there is at least something amusing about one of the biggest stars on the planet forgetting to turn on his two-factor authentication. On a global scale, I’m essentially a nobody, but having a second check on my Fortnite account has saved it on multiple occasions. For a world-wide superstar to fly so fast and loose with their online security is almost laughable, so let this serve as a reminder to attach your phone number to your sensitive online accounts.

In the clip from Ninja’s livestream above, I noticed him sporting the new Tender Defender skin, which was based on a drawing from an eight-year-old fan of the game. Elsewhere in Fortnite, it seems that Disney’s Wreck-It Ralph could be about to make an appearance, while players are searching for Carnival Clown Boards – you’ll need to get a score of ten or more points on each board in order to help level up your battle pass before the season ends.