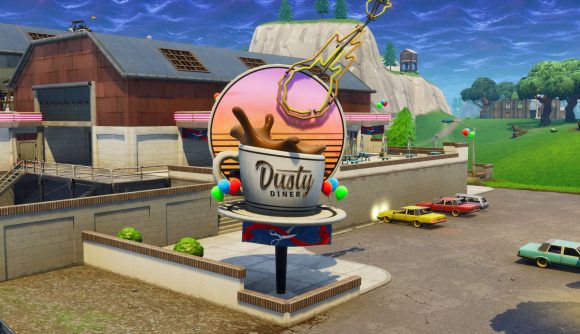 The latest Fortnite patch has introduced some updates to the game’s map, including the newly-added Dusty Diner. The new point of interest has been added to the edge of current location Dusty Divot.

Fortnite’s Dusty Divot has likely had more iterations than any other named location on the map. First there was Dusty Depot, a trio of warehouses in the centre of the map. Then, half of the Depot was wiped out when the comet hit at the end of Season 3, and Dusty Depot was replaced with Dusty Divot. A research facility featured at the centre of the divot, but as Season 4 progressed, trees grew throughout the location, and now it’s one of the most verdant spots in the game, full of flowers, ponds, and most importantly, shield-enhancing mushrooms.

Now, it seems that it’s finally been properly rebuilt, and even Fortnite isn’t safe from the sweep of modern gentrification. Once a bastion of local industry, one of Dusty Divot’s warehouses has been turned into a coffee shop. Welcome to Dusty Diner.

As you can see in the image at the top of this article, the Diner is built out of the Westernmost warehouse, which was largely unaffected by the impact of the meteor (which is referenced in the sign outside the diner). There’s a set of stairs on the left of the picture, that could very well provide an easier way to get in or out of the Divot.

Otherwise, the Diner is relatively similar to many other smaller points of interest. A nice addition, however, comes in the form of the new walls and vehicles, which provide a welcome source of brick and metal in what is otherwise a difficult part of the map to find those materials.

Inside, there’s an amusing throwback to the location’s past. As you can see in the tweet below, there’s a framed photo of the photo, depicting the Depot as it stood in its glory days, before the meteor hit.

Another change arriving in Fortnite patch 5.4, which should be available now, has affected Tilted Towers. One of the buildings there was obliterated when the meteor hit, and has been a building site since then. It’s now been rebuilt, complete with a giant singing fish on the outside wall. Happily, it seems to have retained its basement section, which was an excellent addition to Titled.

It looks better from the front: pic.twitter.com/W3C4ff2DSh

As I mentioned, the latest patch should be live now, but the Fortnite week 9 challenges, which will have you driving ATKs around and blowing up your enemies, have been delayed until tomorrow, thanks to an issue with controllers that Epic is working on fixing.