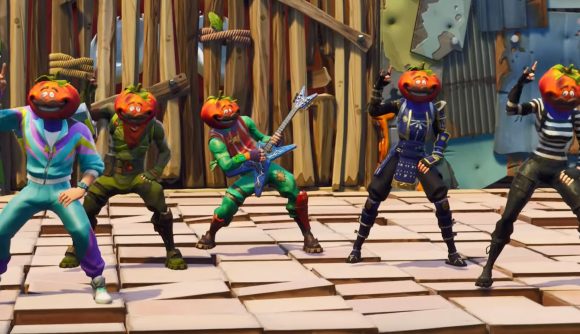 The Food Fight LTM offers a far different flavour than most Fortnite modes. This is a 12v12 mode with infinite respawns, where both teams have to defend a massive fast food mascot head. The defensive focus means players will be forced to actually build forts, and fighters on each side of the Durrr Burger versus Pizza Pit divide will find their heads replaced by their respective icons.

A massive wall separates the two teams at the start of the match, giving each five minutes to gather resources, ready defenses, and prepare for assault. There are special supply drops at the start of each match with weapons, ammo, traps, and healing items, and you get 100% bonus resources from harvesting. Players respawn every seven seconds and keep their inventory when they go down, and you’ll only pick up a smattering of ammo and resources from those you’ve killed.

Some of the other 6.30 additions in these patch notes are well suited to the new mode. Mounted turrets are a new trap type that can give you stationary firepower on top of constructed floors, so they’re a natural fit for a mode like this. The lack of glider re-deploy will also make it a bit tougher to drop behind enemy lines.

Despite what you may see in the trailer below, explosive weapons are not allowed in Food Fight.

Check out our guide to Fortnite Sheet Music locations. The season is starting to wind down as we head through week eight, so you’ll want to make the most of your remaining time to fill out the remainder of your battle pass.