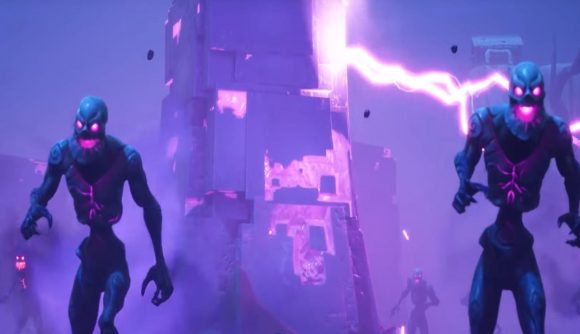 With Halloween 2018 behind us, it’s time for Fortnitemares to come to a close, and the Fortnite prophets tell us that something big is going to happen to Kevin the Traveling Doom Cube today to mark the end of the festivities.

Kevin has been developing fractures over the past few weeks, and Fortnite fans will want to be watching today as a one-time event happens over Leaky Lake. It’ll all be happening at the same time globally, at 13:00 EST/18:00 GMT, so plan on being in a game (and not Playground mode) at that time.

There’s really no knowing what’s going to happen. Kevin the Cube has had a strange journey around the island, initially plunking down runes and eventually plunging into Loot Lake, where it then hoisted the lake’s island into the air. Fans think it’s probably going to explode, but what happens after that is still anybody’s guess.

This summer, Fortnite hosted a similar one-time event, the rocket launch. In that case, everyone knew a rocket launch of some kind was going to happen, but nobody could have foreseen that rocket breaking space-time and creating cracks in the fabric of reality. This is still Fortnite, so expect something similarly unexpected this afternoon.

Forbes’ Dave Thier recommends signing into a round of Disco Domination close to the event’s start time, then jumping out of the bus as soon as you’ve got a view of Leaky Lake and deploying your glider immediately.

But of course, you might want to watch the action from closer up. We can’t be held responsible for what happens to you if you’re caught in a nuclear Kevinsplosion.