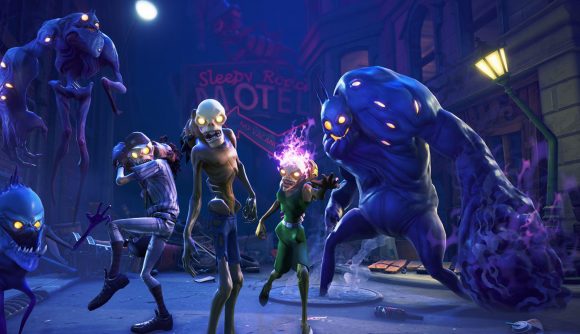 Epic released a patch for Fortnite earlier today that corrected fps drops. Hooray! Now Epic has reverted the patch because it caused other crashes. Boo! The client update has now been reverted, so if you’ve seen some shenanigans in your Epic launcher today, that’s the reason why.

The patch is specific to Save the World, but client updates naturally mean you’ll see the patch no matter what you play. The frame rate issues in question come about when you’re meeting Elemental enemies in Save the World. “Unfortunately,” Epic says, “this fix introduced a new crash which requires us to revert this fix.”

In the Reddit thread, Epic rep MrPopoTFS notes another update for STW – “a fix that will resolve the issue preventing players from completing Canny Valley Defense 2.” A number of back and forth changes over small hotfixes wouldn’t normally be much of a deal, but much of Epic’s attention over the past year has been on Fortnite’s wildly popular Battle Royale. Save the World fans are happy for the increased communication.

Keep scrolling down that Reddit link for examples of how these quick iterations have been received. “This increased communication is great. Keep it up!” “Even if it didn’t work, Epic releasing mid-week patches is very encouraging.” “Wow, I am loving the response time and overall attention stw is getting right now.”

The original Fortnite mode has certainly taken a backseat since Fortnite Battle Royale player numbers skyrocketed, which has been a source of annoyance to stalwart Save the World players – including our own Jeremy Peel, who occasionally intersperses office chats with anecdotes about the ‘one true Fortnite.’

But hey, check out our season 6 week 8 challenges guide if you’re playing that other Fortnite. This season’s battle pass is winding down, after all – no sense in letting it go to waste.