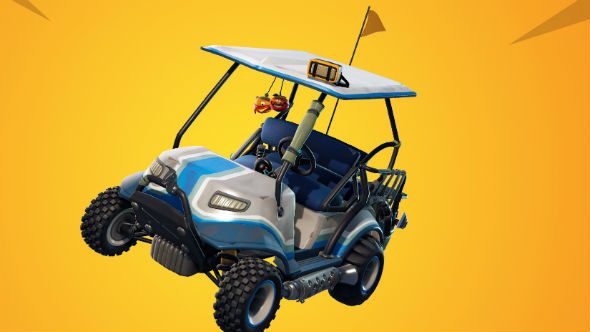 Epic Games could be about to add a new form of cosmetic to Fortnite. Dataminers seem to have uncovered a new cosmetic for the game. The cosmetics will affect the All Terrain Karts, which were added to the game at the beginning of Fortnite Season 5.

The karts are the second vehicle to arrive in the battle royale, after Shopping Carts turned up during Season 4. They can hold up to four players, come equipped with a bounce pad on the roof, and have some very nifty Mario-Kart-style drifting mechanics built in. I’ve found that while they aren’t the most tactically sound addition to the game, they are an awful lot of fun.

Check out our list of the best battle royale games.

Now, it seems that players will be able to customise their Karts. FNBRLeaks on Twitter posted an image of the game files dedicated to cosmetics. Many of those are recognisable – backpacks, dances, gliders, pickaxes, and more all feature in the list, as they do in-game.

As you can see in the tweet below, however, a new file has turned up – vehicle decorations. In the second image, there’s a reference to a specific vehicle skin, the llama mesh.

How the new cosmetics will work isn’t clear. While everything else a player can kit themselves out with is in place before the start of the game, the ATKs spawn into the game in certain places, dressed up as simple golf carts. It could be that the cosmetics appear once a player starts driving a Kart, or that they don’t actually show up to other players, but neither of those options currently feature in the game.